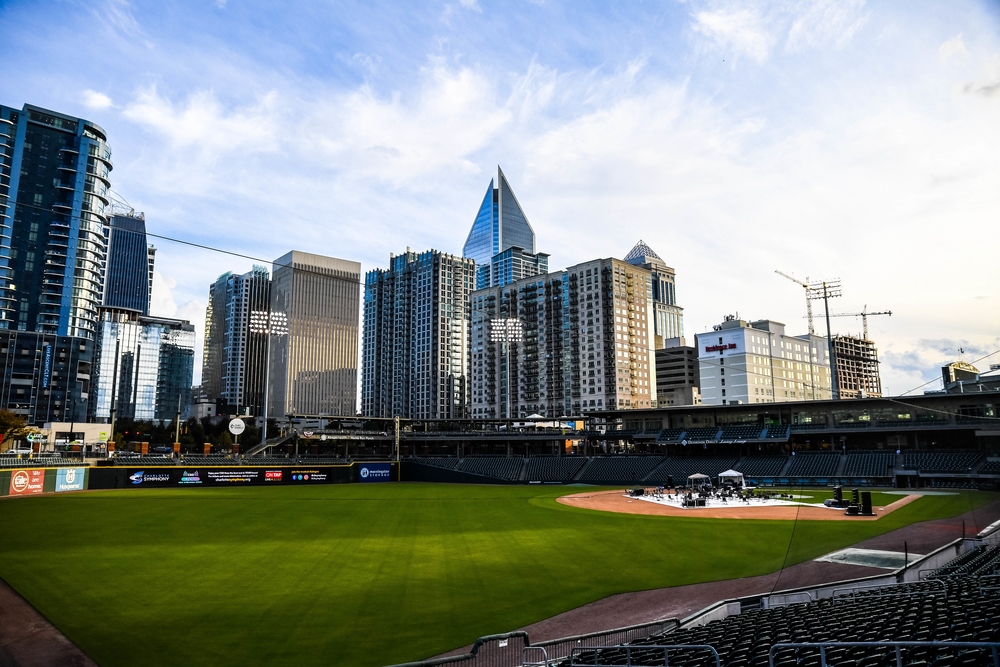 It's a beautiful day in Uptown Charlotte as staff and musicians get ready for the concert on the infield.
2 / 15 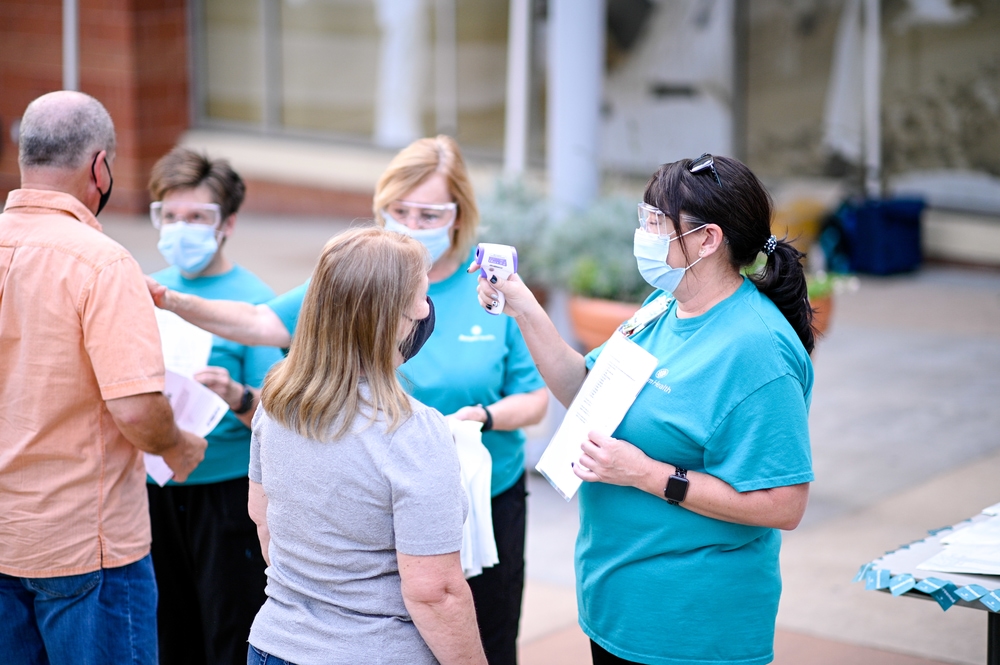 Workers from Atrium Health check temperatures before concertgoers head into Truist Field to find their seats.
3 / 15 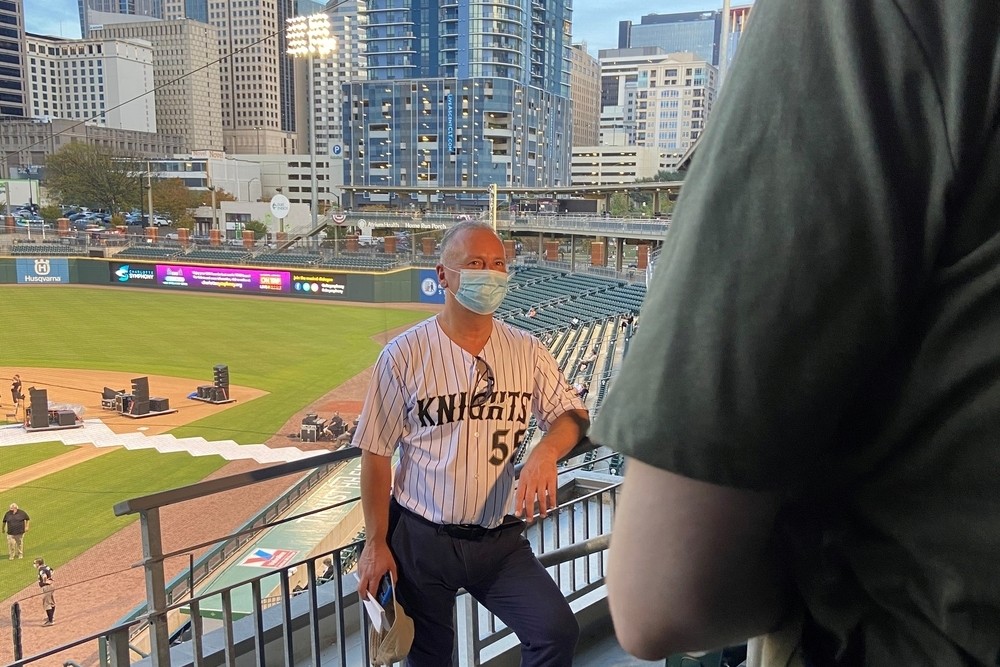 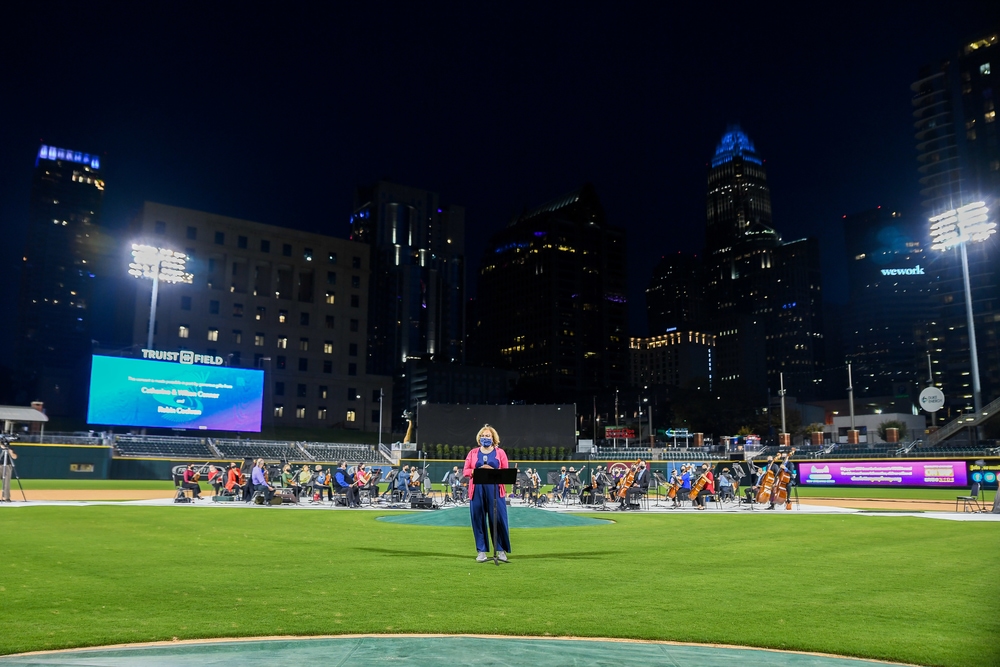 Charlotte Mayor Vi Lyles welcomes the crowd under a skyline lit in CSO teal for the occasion.
5 / 15 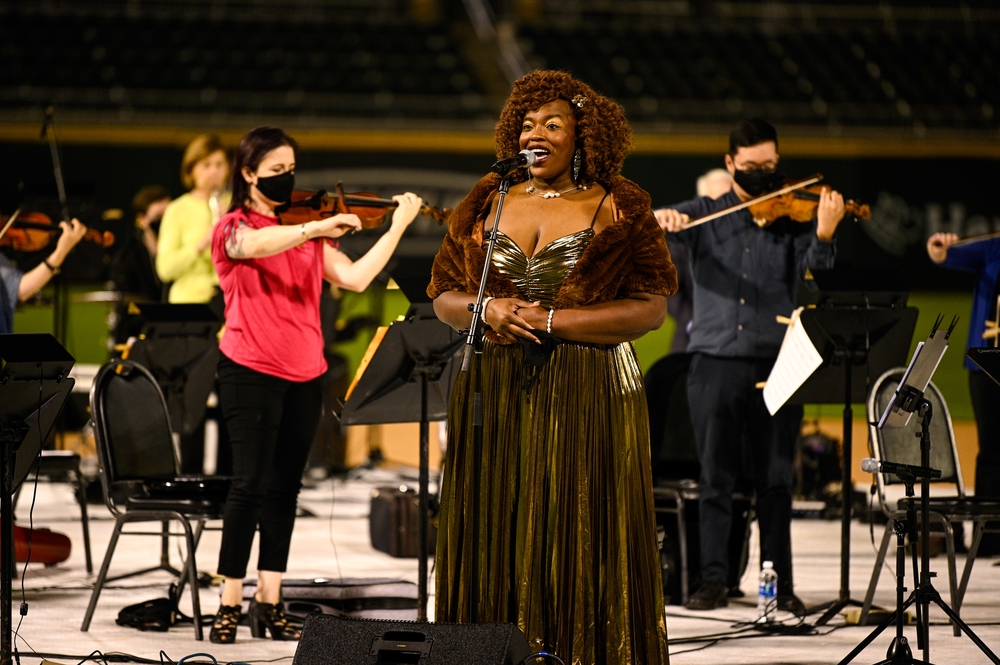 The night's soloist, Jennifer Wiggins opens the concert with a rousing rendition of the Star Spangled Banner.
6 / 15 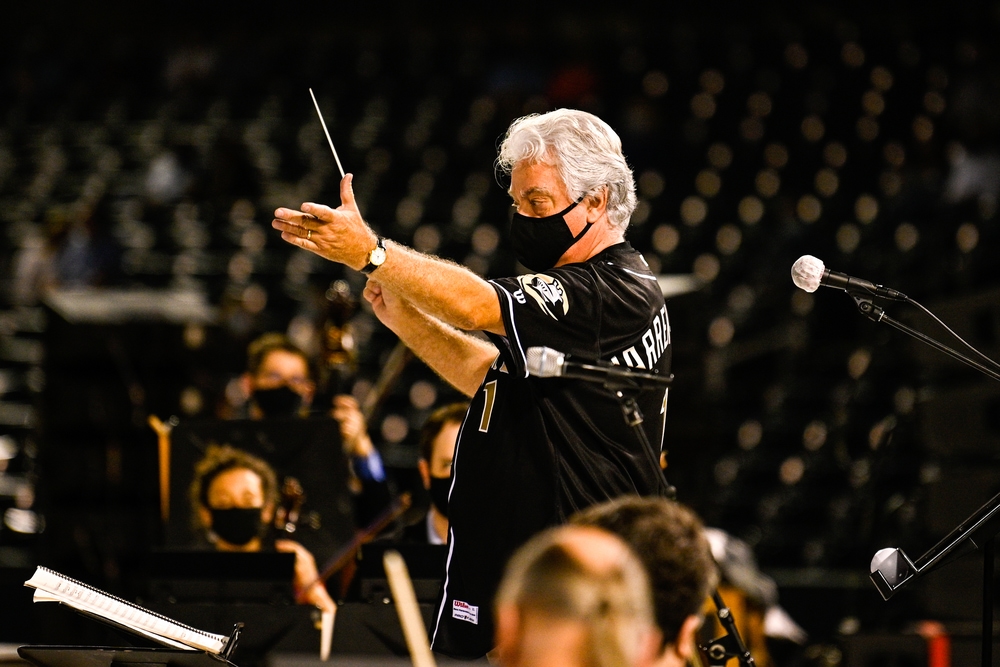 Music Director Christopher Warren-Green conducts the CSO in Nkeiru Okoye's Charlotte Mecklenburg, a piece commissioned by the Symphony on the occasion of Charlotte's 250th anniversary.
7 / 15 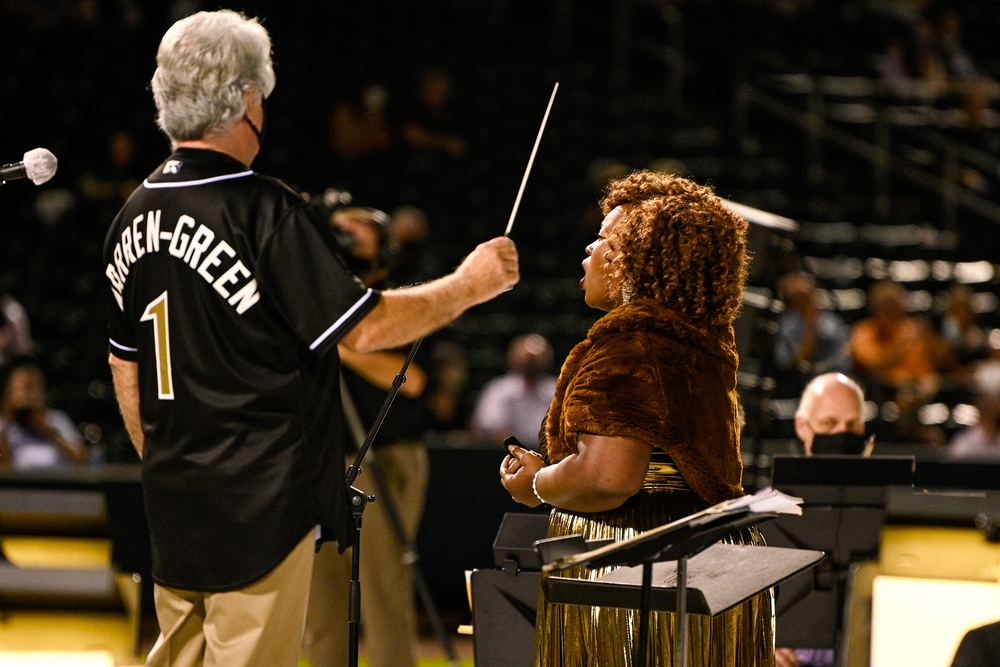 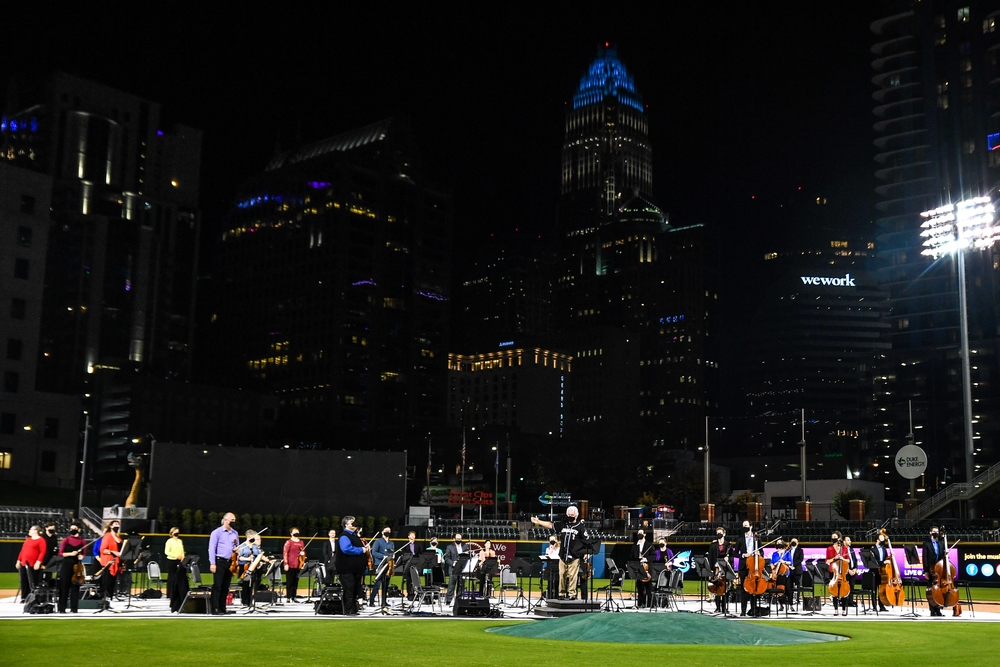 The Orchestra receives a standing ovation after a moving performance of Barber's Adagio for Strings.
9 / 15 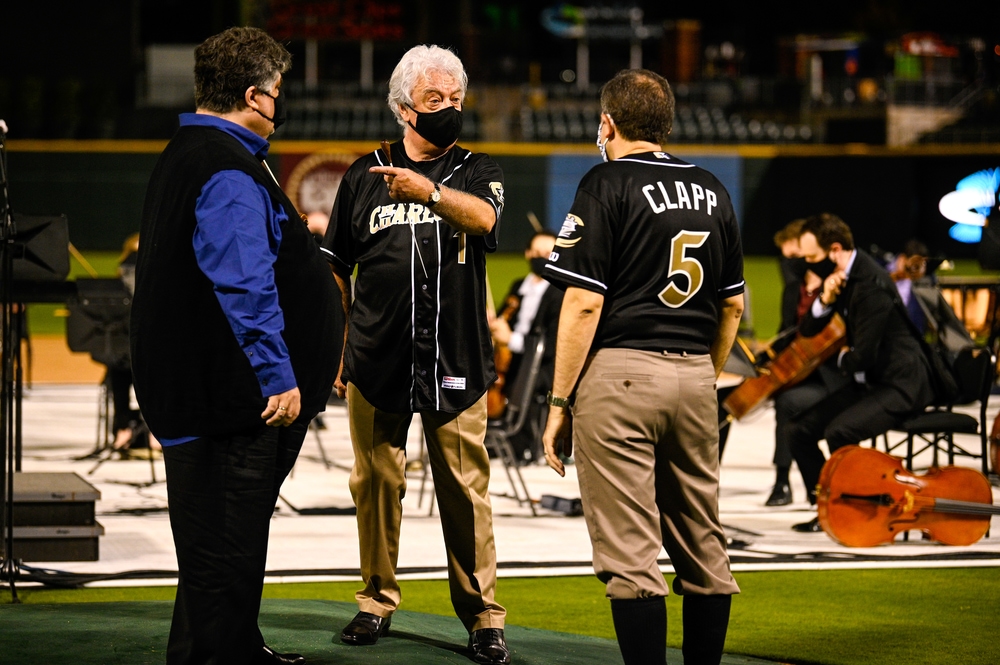 Uh-oh... General Manager John Clapp has paused the concert for a conference on the mound with Warren-Green and Concertmaster Calin Lupanu.
10 / 15 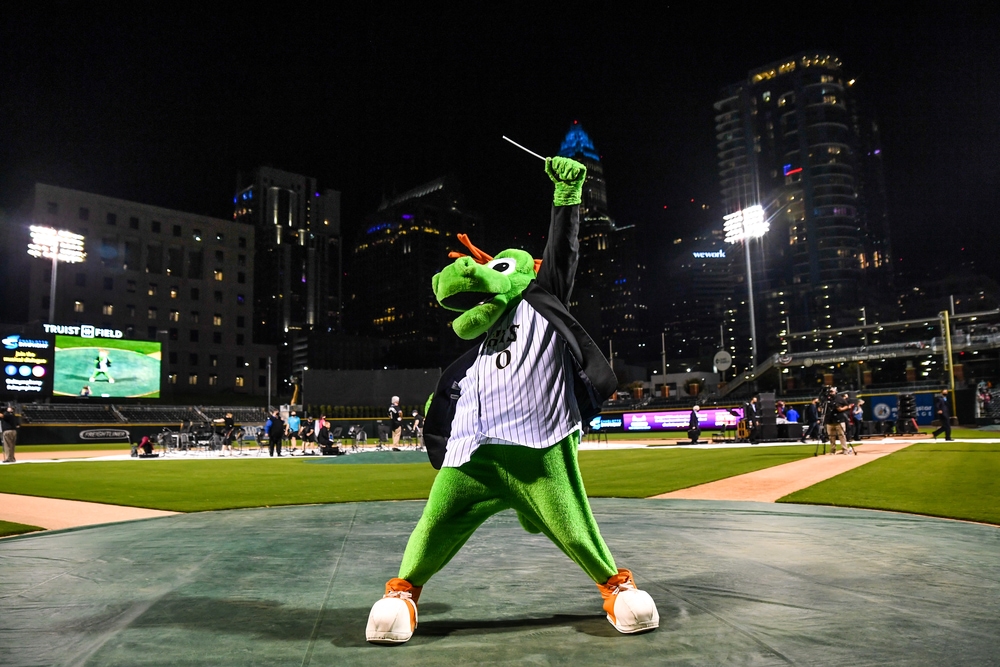 In the meantime, Charlotte Knights mascot Homer the Dragon leads the crowd in an enthusiastic chorus of "Take me out to the ballgame" during the 7th inning stretch.
11 / 15 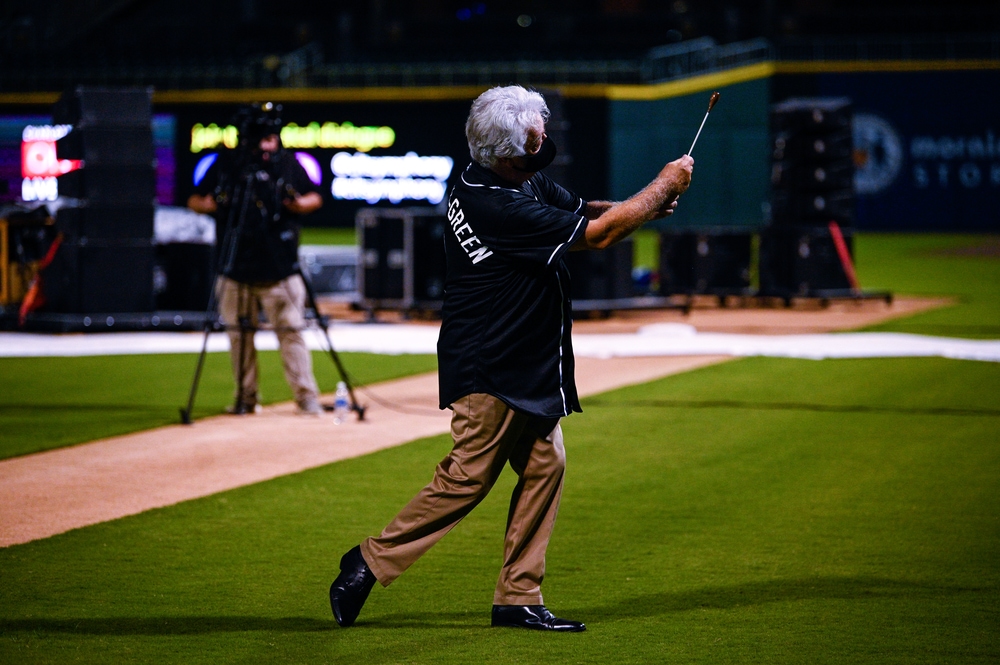 After hitting it out of the part, Christopher Warren-Green takes one more swing for the fences before passing the proverbial baton to the Charlotte Symphony Brass.
12 / 15 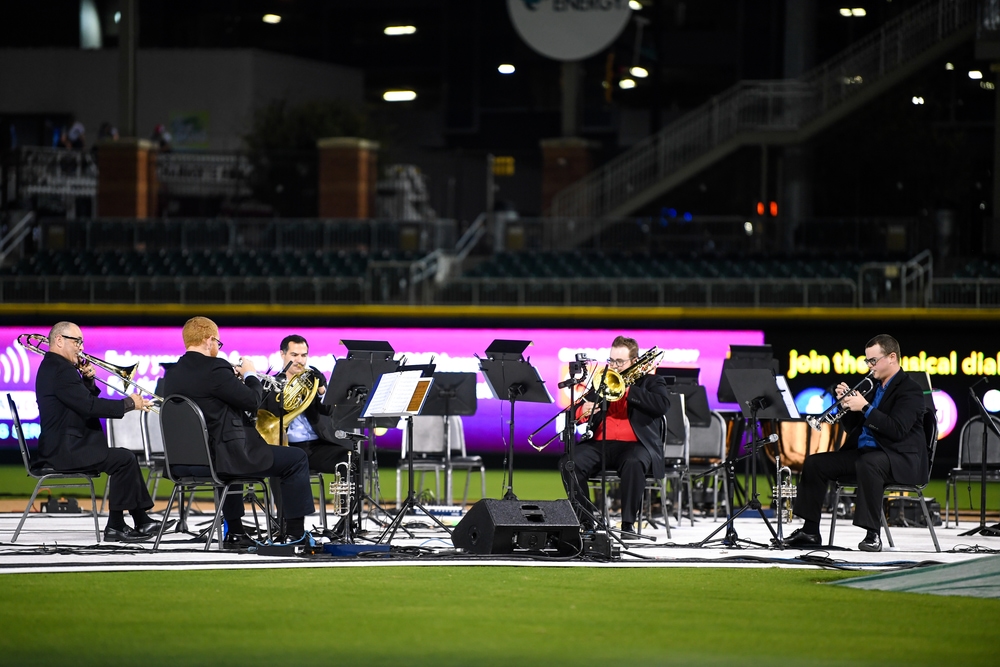 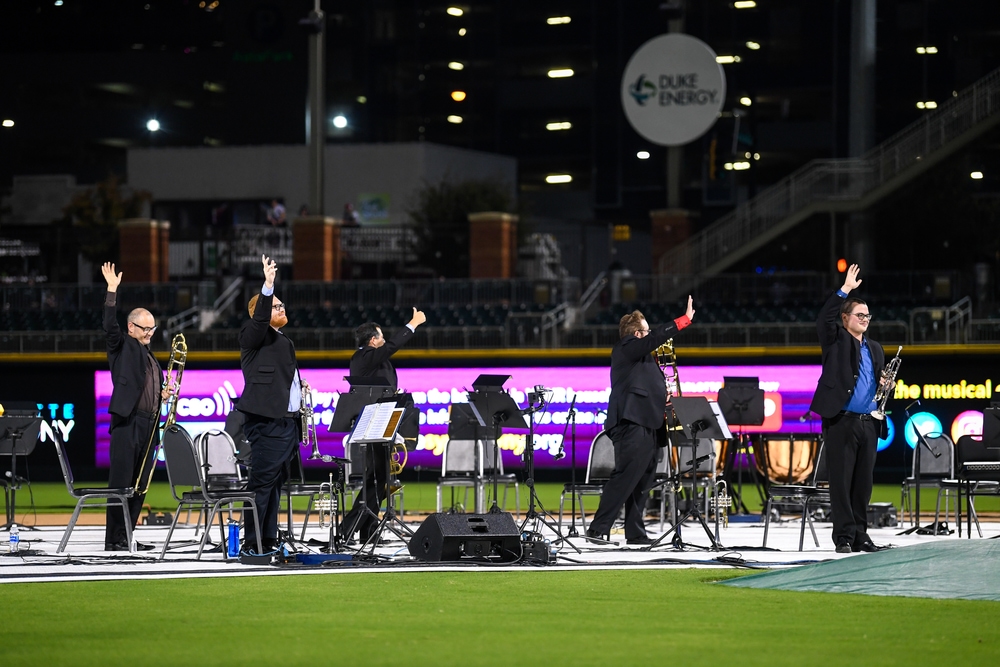 After performing works by The Beatles, Leonard Bernstein, and Duke Ellington, the Charlotte Symphony Brass Players waved to a roaring crowd.
14 / 15 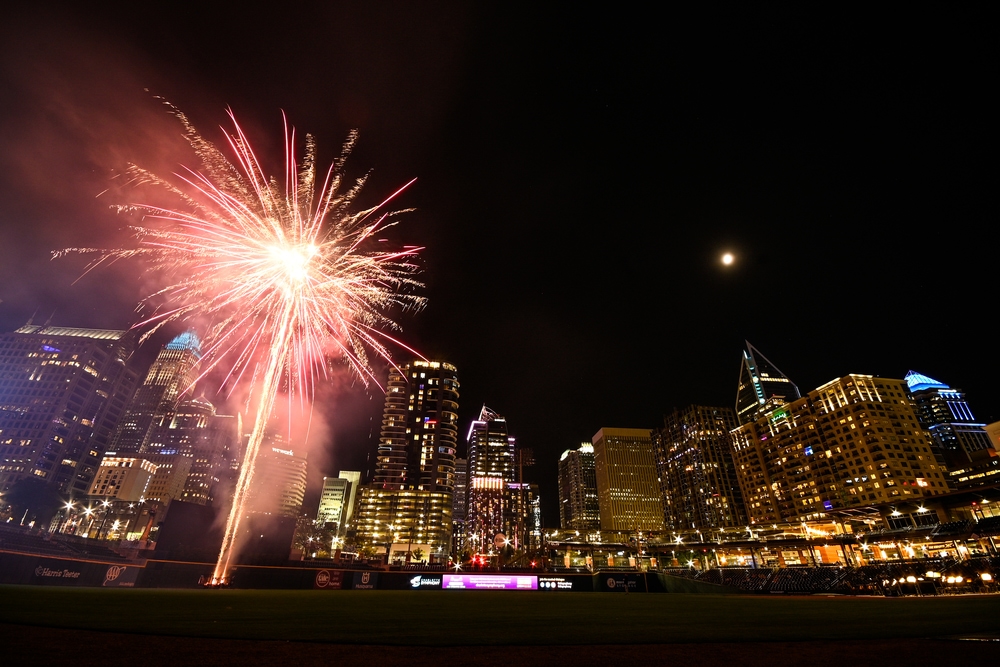 Fireworks light up the sky in Uptown Charlotte.
15 / 15 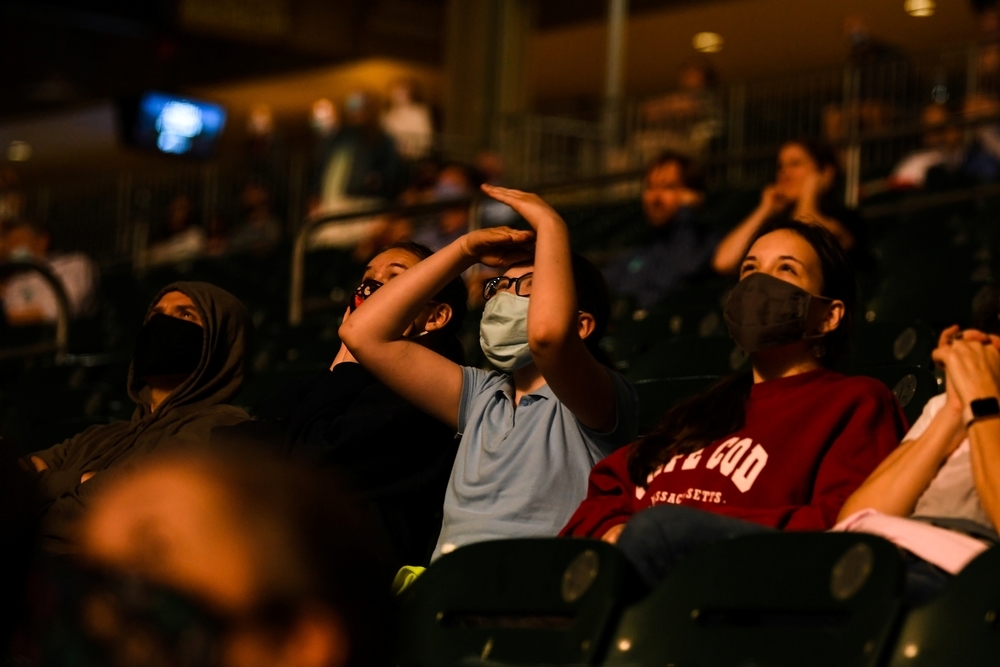 A Home Run for Charlotte 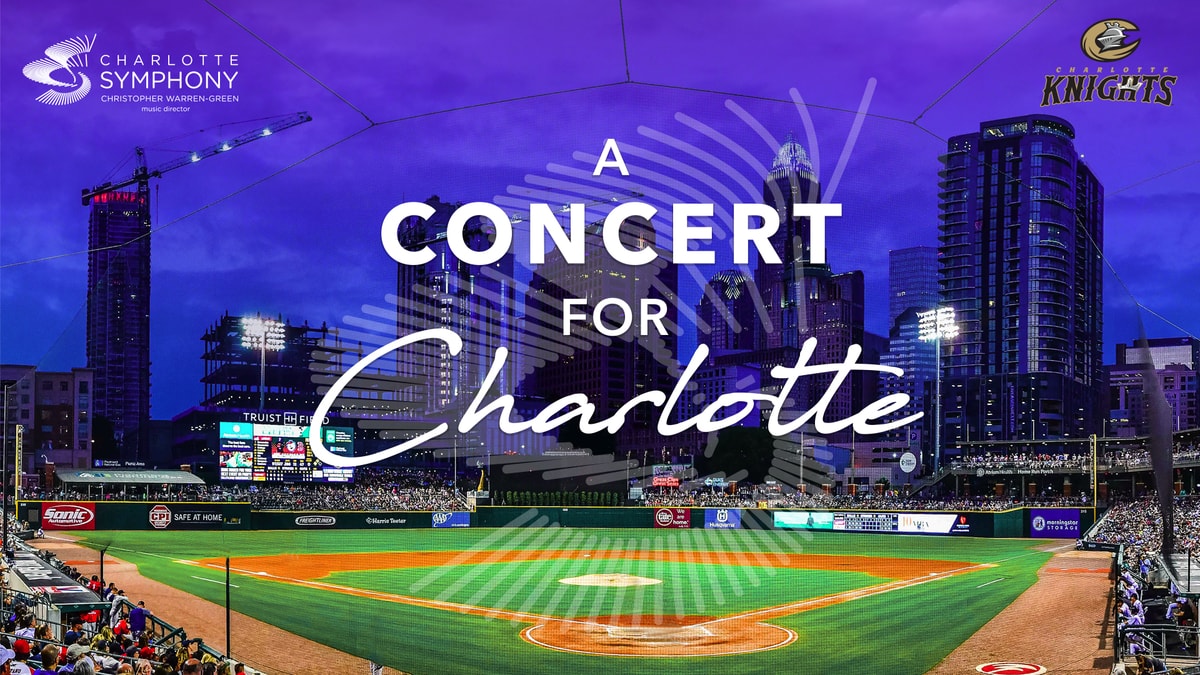 The Charlotte Symphony will be sliding into a new home base on October 24 when we perform "A Concert for Charlotte" a special live event presented in partnership with the Charlotte Knights at Truist Field. The event is designed to celebrate Charlotte and bring our community back together safely through the power of music.

Under the baton of Music Director Christopher Warren-Green, "A Concert for Charlotte" will open with the Star Spangled Banner, sung by Charlotte-based opera singer Jennifer Wiggins. Wiggins will also step up to the plate to perform Che faro senza Euridice from the opera Orfeo ed Euridice. She had this to say about being part of this special event:  The concert will continue its celebration of Charlotte with Nkeiru Okoye's Charlotte Mecklenburg -- a piece commissioned by the Charlotte Symphony on the occasion of Charlotte's 250th anniversary which reflects the rich and diverse history of the city -- Rossini's Overture to L'Italiana in Algeri, Jessie Montgomery's Starburst, Barber's Adagio for Strings, John Williams's Air and Simple Gifts, and the final movement of Beethoven's Symphony No. 7.

Finish the night with some peanuts and Cracker Jacks and enjoy a brilliant fireworks display that will light up the Uptown sky.

By Gene Kavadlo, former principal clarinetist of the Charlotte Symphony

As the orchestra was rehearsing, the loud sound of a vacuum cleaner in the lobby was becoming increasingly annoying. Finally, the conductor asked his assistant, a rather diminutive fellow, to see if he could do something about it. Jordan went to the lobby. Suddenly there was a THWAP! and the annoying sound stopped abruptly. Without missing a beat, Jim said "Oh no, now we're going to have to get Jordan out of the bag." Anyone who knew Jim knew that he was the sharpest wit in the room. My children, now in their 40's, always referred to him as "our Jim." Our Jim succumbed to a 17 year battle with cancer on August 11, 2020.

I first met Jim in our student days at Indiana University during the 1960's. After college Jim served four years in the military as a member of the US Marine Band and White House Orchestra, and I went on to become the Principal Clarinetist of the Charlotte Symphony in N.C. One day I got a call that started with "You probably don't remember me..." It was Jim, and of course I knew exactly who he was. He had taken an audition with the Charlotte Symphony and won the job - beginning a fabulous eight year relationship as colleagues in the same Orchestra. It was in the Charlotte Symphony that Jim started playing the bass clarinet. There had been an older gentleman playing, but his skills were declining. One day the instrument fell over as it was resting in its stand, and Jim declared that it had committed suicide.

When Jim won a job at the MET I had very mixed feelings. I didn't want to lose my dear colleague, but he certainly couldn't pass up a career move like that. Before leaving Charlotte Jim found out that one of his first assignments would be to play the basset horn obligato from Mozart's Clemenza di Tito. Jim had never played the basset horn, nor heard Clemenza di Tito. We listened to a recording in my living room (before YouTube days), and Jim burst out laughing. When I asked him what was so funny, he said "I'm so glad I get to play this at the MET before I play it someplace really important." Naturally, his performance several weeks later was superb. Thus began his 33 year tenure as Principal Bass Clarinetist with the Metropolitan Opera Orchestra. Jim's playing can be heard on numerous Grammy award winning Metropolitan Orchestra recordings, including Wagner's Ring Cycle on Deutsche Gramophone. He was also a member of the All-Star Orchestra made up of leading players from major American Orchestras. He served many summers in the Spoleto, Grand Teton, Bard, Napa Valley and Verbier festivals, and was an instructor at Julliard.

Former Principal Oboist of the MET, John Ferrillo, visited Jim a few days before he passed and played some beautiful oboe music for him. This is a story from John: "When Jim was stationed with the Marine Band in DC, he was dating an oboist. On a number of occasions he would make the 3 hour drive to Philly to bring her to her lesson with John deLancie, first oboist for the Philadelphia Orchestra. On one of those drives he needed to use the bathroom; when he asked permission, Mr. deLanci told him no.

"Years later, Mr. and Madame deLancie came to the MET. They were ardent opera fans. At the end of one of the performances, they met me at the gift shop. Before we parted company, he asked me who was playing the basset horn in Clemenza di Tito two broadcasts ago. I was delighted - 'funny you should mention him; that was my close friend, Jim Ognibene.' 'Well...let me tell you - that was some of the finest woodwind playing I have ever heard!' 'Why, Mr. deLancie, that's Jim coming through the doors right there.' Mr. deLancie insisted on taking Jim aside and spoke avidly to him for a number of minutes. For Jim it was one of the greatest accolades he'd ever received."

Later that night, I called Jim. Of course, I knew the line was coming. "I thought the time was right for me to ask if I could use his bathroom now."
Our thoughts and prayers are with Jim's family and friends.
Charlotte Symphony Charlotte Symphony

October 5, 2020
Now you can enjoy your Charlotte Symphony from the best seat in the house your favorite living room chair!

We understand that not everyone will feel comfortable attending concerts in person at this time, but we're committed to bringing music to you, wherever you are! If technology feels like a barrier, we want to help. Check out our tips below and you'll be able to live stream the CSO right to your preferred device.

Watch on your phone, tablet, or computer

When you purchase tickets to a CSO live stream or recorded performance, you will be provided a link CSO (sent via email up to 2 days prior to the concert date) and login information to a CSO website page. Simply click or tap on the link in your email, login in using credentials provided in the email, and enjoy the performance.

Watch on your TV

Android TV / Amazon Fire TV
Connect your device to the same Wi-Fi network as your TV, access the video using your phone, tablet, or computer (using the directions above), tap on the Cast icon on the video (Note: You may have to first tap on the YouTube logo on the video, opening the video in YouTube, for the Cast icon to appear), and select the name of your TV. When Cast changes color, you have successfully connected.

Smart TV Internet App
To watch on your smart TV, locate the internet or preferred search engine app (i.e. Chrome, Firefox, Samsung TV Web Browser, etc.) on your TV's home screen and enter in the link URL provided by your CSO (sent via email up to 2 days prior to the concert date). From there, enter in the login information to access the page, and then click the full screen icon on the video.

Music Director Christopher Warren-Green has some of his own advice for how to enjoy our virtual concerts: "Get dressed, go into your living room, have a glass of wine, sit down and make sure no one interrupts you. Do that and watch our virtual concerts, and you'll get something extraordinary from it."

Your Charlotte Symphony held its first live concert since March on Tuesday night, and boy did it feel good! A little drizzle couldn't stop the music or the smiles on the faces of CSO musicians, staff, and excited concertgoers. 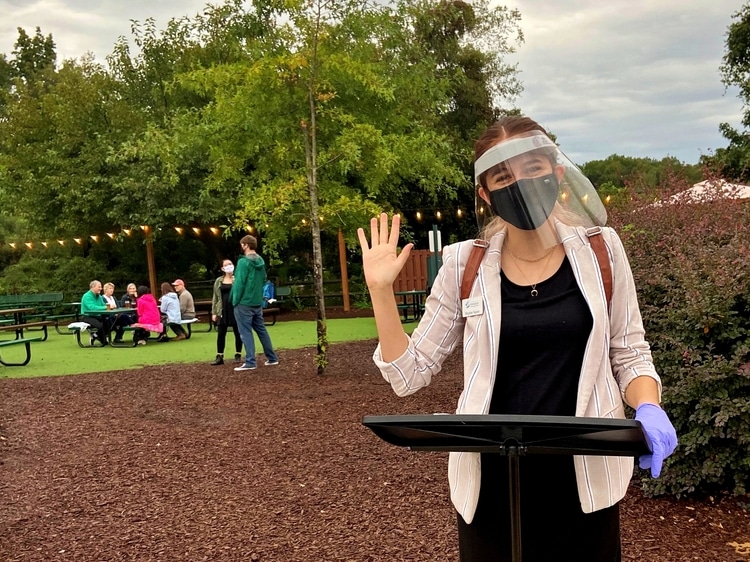 Ticket Services Manager Meghan greeted concert-goers outside NoDa Brewing Co. with a smile that could be felt even through her layers of PPE.
2 / 10 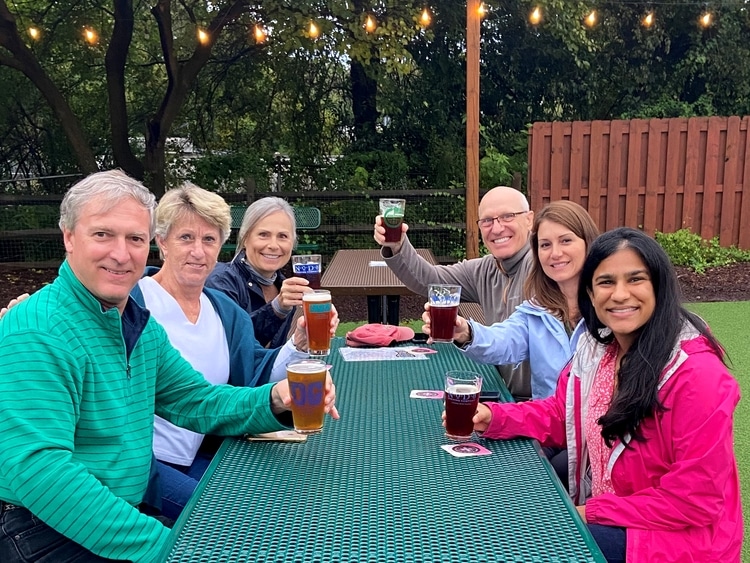 Guests grabbed a cold one, sat with friends and family, and toasted to the Charlotte Symphony's first concert since March.
3 / 10 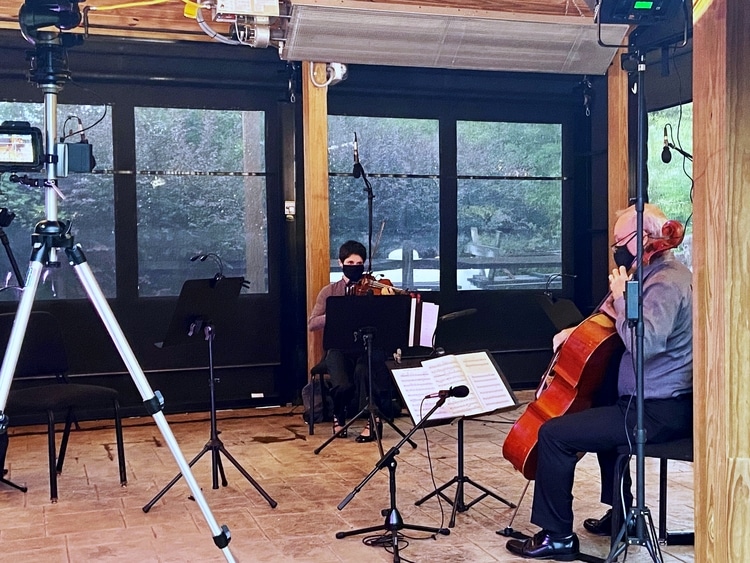 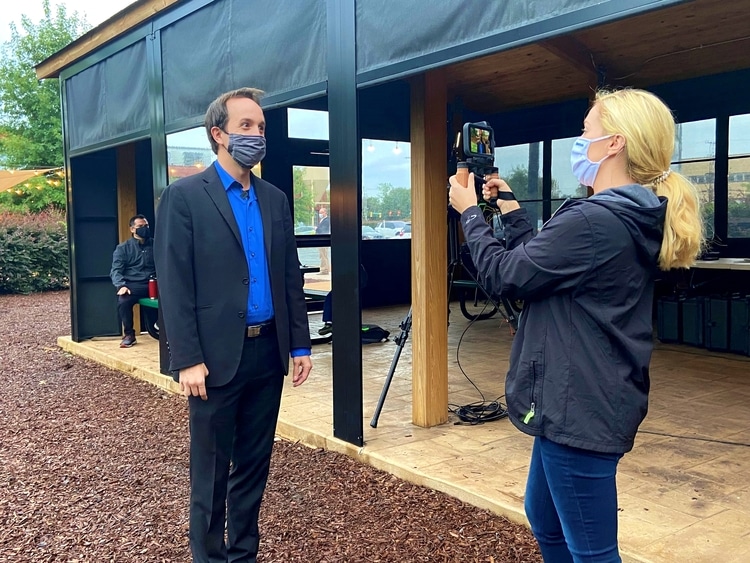 Resident Conductor Christopher James Lees does a quick interview with Spectrum News before donning his "host" hat for the live and virtual audiences.
5 / 10 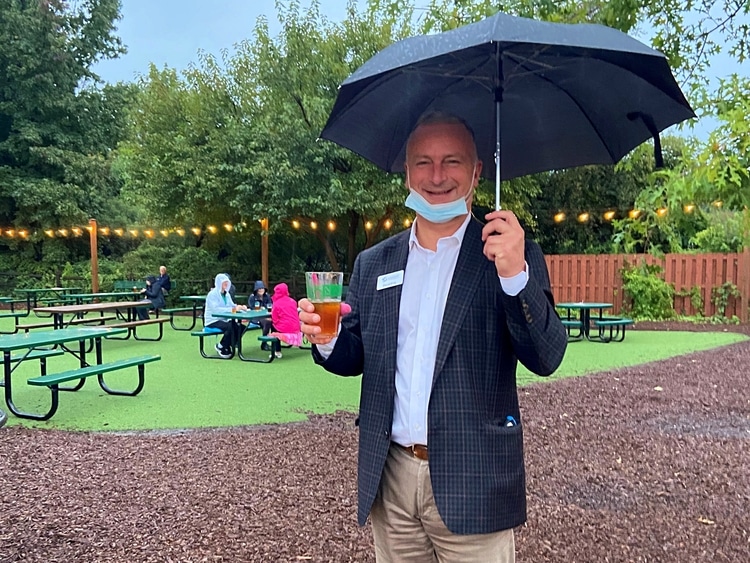 A little drizzle couldn't put a damper on new President and CEO David Fisk's excitement over hearing live music after such a long drought.
6 / 10 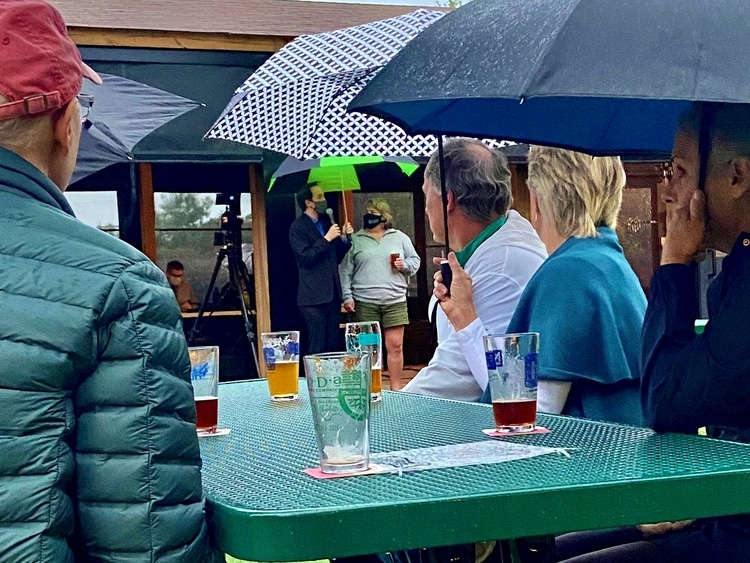 Undeterred by the rain, the CSO's die-hard fans pulled out umbrellas while Christopher James Lees and Suzie Ford, owner of NoDa Brewing, Co., welcomed them to the concert.
7 / 10 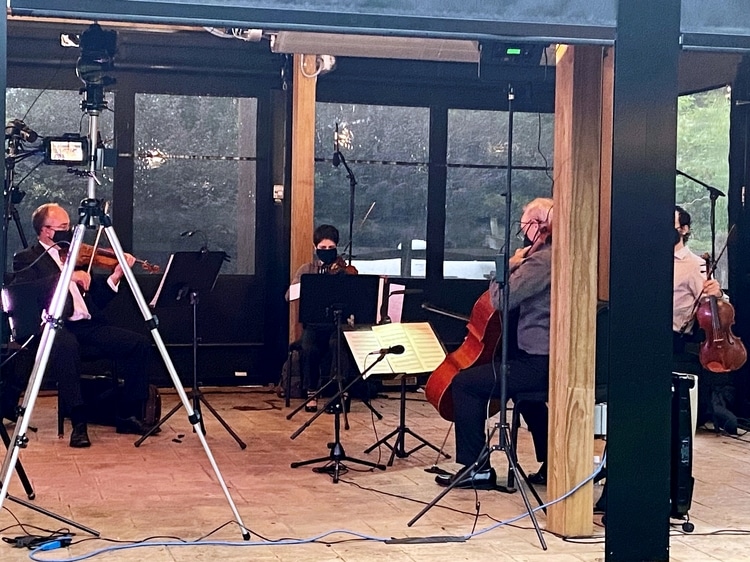 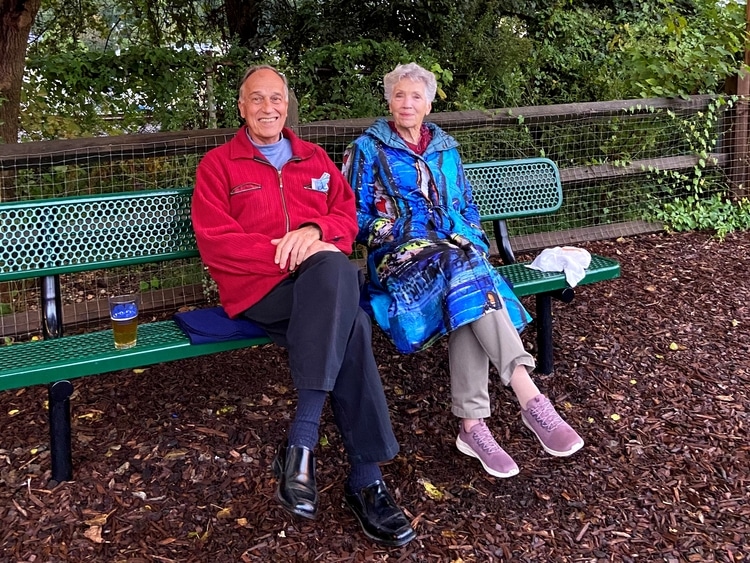 This couple found a dry spot under the trees to relax while Price's work was brought to life by the CSO's talented musicians.
9 / 10 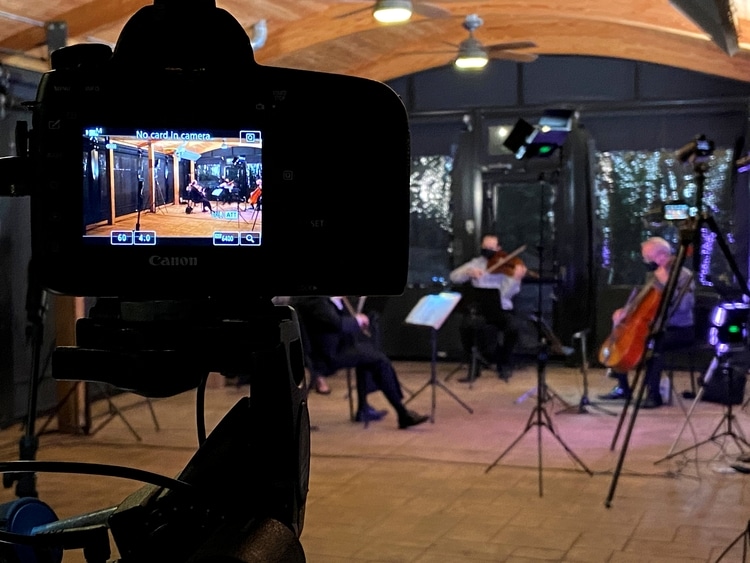 In person tickets for this concert were sold out, but for the first time we also welcomed a live virtual audience!
10 / 10 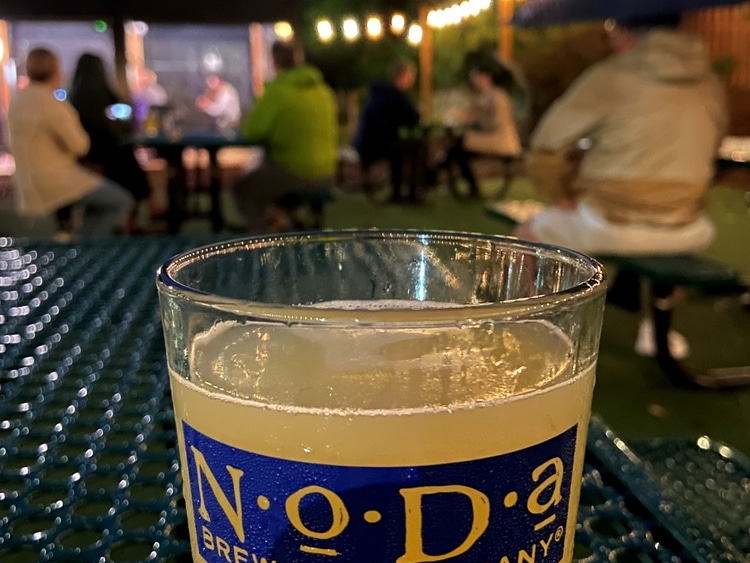 Skies began to clear as the final notes of Haydn's String Quartet Op. 76, No. 2 rang out and the musicians received a warm standing ovation.
❮ ❯