"An Instrument Meant to Be Played": Joshua Bell on His Stradivarius Violin

by Joshua Bell, on his historic instrument's 300th birthday.

Known as the Gibson ex Huberman, the revered instrument came into my life one fateful day during the summer of 2001. I was in London, getting ready to play a Proms concert at the Royal Albert Hall and decided to stop by the famous violin shop, J & A Beare to pick up some strings. As I entered the shop, Charles Beare was just coming out of the back room with a stunning violin in hand. He told me that it was the famous Huberman Strad, and of course I was instantly intrigued. 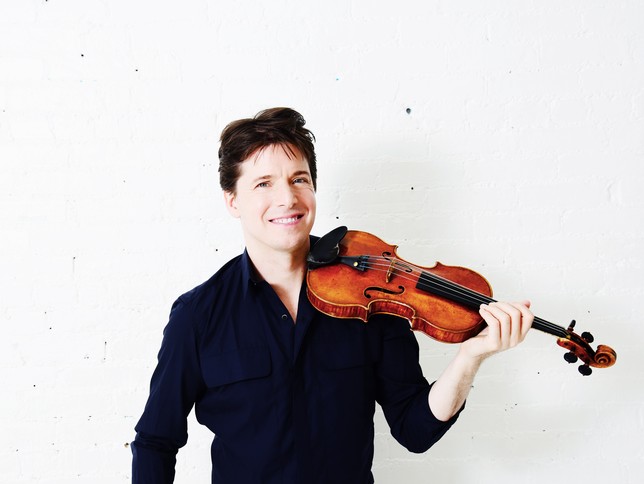 I soon learned all of the known details of the violin's remarkable history, which is complete with twists and turns to rival the film that I had only recently finished working on, The Red Violin. Believed to be one of only five or six instruments made in 1713 by Antonio Stradivari in Cremona, Italy, the violin has belonged to many, including the English violinist George Alfred Gibson. But it was its connection to Bronislaw Huberman that I found particularly fascinating and somewhat personal.

Huberman was a Jewish Polish violinist who lived from 1882-1947. He was a child prodigy who was revered for his remarkable virtuosity and daring interpretations. Huberman studied under Joseph Joachim in Berlin, and by the age of 11 he was already touring Europe as a virtuoso. It was during one of those early tours that he met the pianist Arthur Rubinstein, who was only six at the time, and had not yet achieved the legendary status that he came to hold. The two musicians remained lifelong friends.

At 13 Huberman had the honor of performing the violin concerto of Johannes Brahms in the presence of the composer himself, who was stunned by his interpretation. According to biographer Max Kalbeck, "As soon as Brahms heard the sound of the violin, he pricked up his ears, during the Andante he wiped his eyes, and after the Finale he went into the green room, embraced the young fellow, and stroked his cheeks. When Huberman complained that the public applauded after the cadenza, breaking into the lovely Cantilena, Brahms replied, 'You should not have played the cadenza so beautifully.' "

Huberman became one of the most celebrated musicians of his time, but it was in 1929 that his contribution to humanity took on an added dimension. During that year he visited Palestine and came up with the idea to establish a classical music presence there. During Hitler's rise to power, Huberman had the foresight to realize he could save many Jewish artists while fulfilling his desire to start a Palestinian Orchestra. Huberman auditioned musicians from all over Europe. Those selected for the orchestra would receive contracts and, most importantly, otherwise impossible-to-get exit visas from their homeland to Palestine. Huberman raised the money for the musicians and then their families, even partnering with Albert Einstein to set up an exhaustive U.S. fundraising trip in 1936. By the end of that tour, the money for the orchestra was secured and sixty top-rate players had been chosen from Germany and Central Europe.

All in all, it was a fantastically successful tour, barring one particular performance at Carnegie Hall on February 28th.  That night Huberman chose to play the second half of his concert on his 'other violin', a Guarneri del Gesu.  During the applause following his performance of the Franck Sonata, Huberman's valet walked on stage to inform him that his Stradivarius had been stolen from his dressing room. The police were called while Huberman tried not to panic, continuing optimistically with his encores. The instrument had previously been stolen in 1919 from a hotel room in Vienna but was recovered days later when the thief tried to sell it. This time, Huberman was not so lucky.

There are several versions as to exactly how and why the violin was stolen, but what we know for sure is that the instrument ended up in the hands of a young freelance violinist by the name of Julian Altman. Some say Altman's mother convinced him to steal it; others report that Altman bought if off the actual thief for $100. Regardless, Altman took great pains to conceal the violin's true identity, covering its lovely varnish with shoe polish and performing on it throughout the rest of his career, which included a stint as first chair with the National Symphony Orchestra during World War II.

Heartbroken, Huberman never saw his Stradivarius again. However, his great dream was fulfilled when the new Palestine Orchestra made its debut in December of 1936 with the great Toscanini on the podium. I like to imagine that my own relatives might have been in the audience on that opening night, as my grandfather was born there and my great grandfather was part of the first "Aliyah" of Russian Jewish immigrants to Palestine in 1882. As for his violin, it was played by its suspected thief for over fifty years, and in 1985, Julian Altman made a deathbed confession to his wife, Marcelle Hall, about the true identity of the instrument. She eventually returned the violin to Lloyd's of London and received a finder's fee; and the instrument underwent a nine month restoration by J & A Beare Ltd which noted it was like "taking dirt off the ceiling of the Sistine Chapel."

The instrument was then sold to the late British violinist Norbert Brainin of the Amadeus String Quartet. Previous to my fortuitous encounter with the violin at J & A Beare, Brainin had once let me play it after a rehearsal of the Mozart g minor string quintet which I had the pleasure of playing with him one evening in the 1990s. "One day you might be lucky enough to have such a violin," he had said prophetically.

And so here I was in 2001, buying some strings at the violin shop and I was introduced to the 1713 Stradivarius again. As it was handed to me, I was told it was being sold to a wealthy German industrialist for his private collection. However, after playing only a few notes on it I vowed that this would not happen. This was an instrument meant to be played, not just admired. I fell in love with the instrument right away, and even performed that very night on it at the Royal Albert Hall. I simply did not want it to leave my hands.

This violin is special in so many ways. It is overwhelming to think of how many amazing people have held it and heard it. When I perform in Israel with the Israel Philharmonic, I am always touched to think how many of the orchestra and audience members are direct descendants of the musicians Huberman saved from the Holocaust with funds raised by concerts performed on the very same instrument I play every day. Who knows what other adventures will come to my precious violin in the years to come? While it certainly will be enjoyed and admired long after I am not around anymore, for the time being I count myself incredibly lucky to be its caretaker on its 300th birthday.
Charlotte Symphony Charlotte Symphony