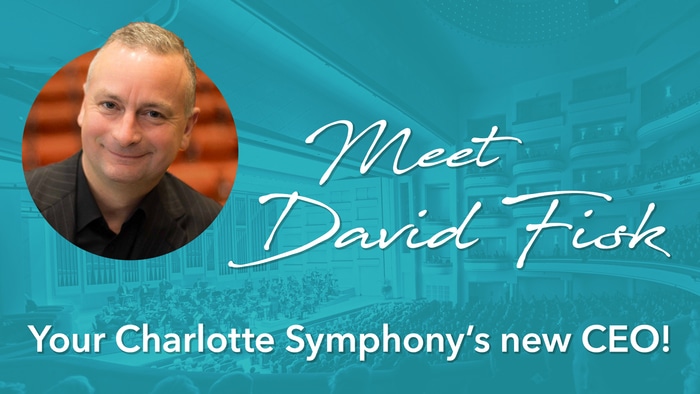 We're thrilled to announce your Charlotte Symphony's next President & CEO: David Fisk, current Executive Director of the Richmond Symphony, begins his new position at the CSO on August 31.

Born in Great Britain, Fisk moved to the United States in 2002 to serve as Executive Director of the Richmond Symphony, where access to music for all and strong financial management were consistent themes under his leadership.

Fisk began his musical life at the age of eight in the choir at St. Paul's Cathedral in London. He went on to receive his degree in music from Manchester University and a postgraduate diploma in piano accompaniment from the Royal Northern College of Music, where he also studied harpsichord, composition, and conducting. Prior to moving into arts management, Fisk worked for a number of years as a freelance composer/arranger, conductor, repetiteur, and orchestral keyboard-player.

Fisk is married to Irish soprano Anne O'Byrne. They have a daughter, Fionnuala or "Finn" (22) and son Oliver (19). Other than music, his hobbies include swimming and scuba diving - often off the coast of North Carolina - horseback riding, and motorcycling.


Watch the video below for a personal greeting from David Fisk!