Meet the Symphony's New Resident Conductor: An 'Evangelist' for the Art Form 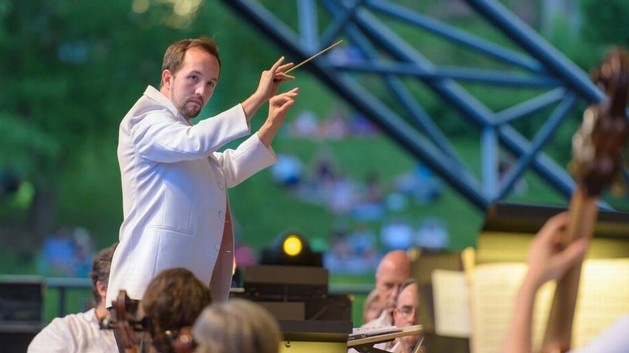 Every success Christopher James Lees has had, from college up to his recent hiring as the Charlotte Symphony Orchestra's new resident conductor, has been wrapped up in a lock of hair.

It comes from the otherwise bald head of Kairos, Greek god of opportunity, whom Lees brings up twice in a conversation about his new job. Legend has it that you have to catch that single lock of hair the instant Kairos passes by or miss him forever.

Lees seized it in his early 20s and has never let go. Now, at 36, he'll occupy a job the CSO designed for him: A have-stick-will-travel gig that may take him anywhere from helping Alzheimer's patients to opening the Summer Pops season June 13 in a Kruger Brothers concert that breaks new ground. (Read about the 2018 Summer Pops here.)

You'd guess he's a runner by his slender frame and amiable but intense manner in conversation. He has hurtled up and down Interstates 77 and 40 to Winston-Salem over the last two years, dividing his time between teaching and conducting at University of North Carolina School of the Arts and serving as the CSO's assistant conductor. But he, wife Lindsay Kesselman (a fellow specialist in new music) and 3-year-old son Rowan are relocating to Charlotte. ... click here for the full story.