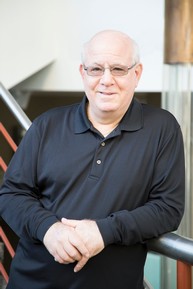 Frank Portone, Principal Horn, began playing the horn at age 11. He graduated from The College of Music at Temple University in Philadelphia in 1975 and freelanced in the Philadelphia area from 1972 until 1977, when he won the Principal Horn position with the Hong Kong Philharmonic. Portone held that position until 1980. Just five days after returning from Hong Kong with his wife and new baby, he won the Principal Horn position in the Charlotte Symphony. Portone also manages and plays in The Original Carolina Brass and is Adjunct Instructor of horn at Davidson College. He also teaches privately in his home studio.

First season with the Charlotte Symphony: 1980-81
Why did you select your instrument?
My middle school band/orchestra teacher needed a horn player and slyly showed me a brand new, shiny French Horn. It was love at first sight!
Does your instrument have a special story?
Most of the horns in our horn section are made by the same custom horn builder. He has a four year waiting period for his horns! I'd say that makes them special.
What would most surprise people about you?
People who have never me sing are usually pretty surprised when I start into an opera aria. However, I do make a mean lasagna!
If you could meet one composer, who would it be and what would you ask him/her?
Gustav Mahler. I would try to learn from him what inspired his music to be so diverse within movements of his symphonies. He often jumps from serious, dark melodies to light hearted folk music to a polka, etc., all within one movement. I love his music!
What’s your funniest/most compelling on-stage moment?
I've never had one that I can recall! Every concert is a great thrill for me. Some have stood out more than others over the years, but I still get "that feeling" out on stage.
Any pre-performance rituals?
I don't eat dinner. I like to play on a fairly empty stomach. Of course, this means I'm famished after a concert!

Other than your instrument, what would we find in your instrument case?
Two mutes, extra mouthpieces of different sizes for different purposes, valve string, valve oil, screwdriver, my music glasses, a towel, toothbrush and most importantly, photos of my grandchildren, my children, and my wife.
What do you love most about being a professional musician?
Making music of course and looking out at the audience on concert nights and hoping to bring some joy and/or peace to someone's life that evening.