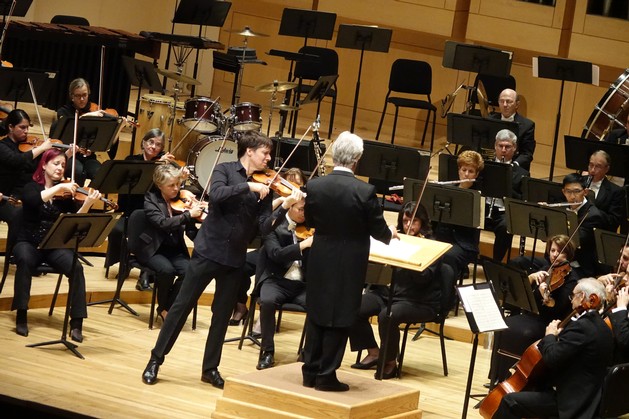 Although violinist Joshua Bell hadn't played with the Charlotte Symphony since the 1994-95 season, he has maintained a presence across the Carolinas, appearing at Spoleto Festival USA, the Brevard Music Festival, and Asheville's Bravo Concerts during the intervening years. Quite the favorite with promoters at Charlotte Concerts, Bell has also been welcomed to the Queen City on multiple occasions during the new millennium, a couple of times as the featured soloist and music director of London's most revered small orchestra, Academy of St. Martin in the Fields.

So it's gratifying to report that, in his first appearance on the Belk Theater stage in 11 years, the Tom Cruise of violinists isn't merely the same-old same-old Bell with more mileage on his chassis. Symphony's OPENING NIGHT GALA lived up to its headliner and its hype, for I've never seen Bell play quite this well before. Nor was the Bell performance alone in being special as Symphony launched its 2018-19 classics slate, for music director Christopher Warren-Green not only soothed subscribers' Shostakovich anxieties with a brassy overture, he slayed their fears of new music with a world premiere by Nkeiru Okoye celebrating Charlotte's 250th anniversary.