If you visit the Charlotte Symphony this season, chances are you'll hear something...a little different. The Symphony's new President and CEO Mary Deissler is encouraging a diversity in the group's sound and audience. WFAE's Sarah Delia has more.

Mary Deissler planned to make a living as a musician from the stage, but there was a problem.
"Sitting in New England Conservatory in a practice room trying to focus and work and hearing the kids around me who were so much better than me and I did have a problem of stage fright. As a pianist my mind would go blank. So I said people here are way better than I am. And I always think when I'm going on stage I'm going to throw up so it was time to find something different," Deissler said. 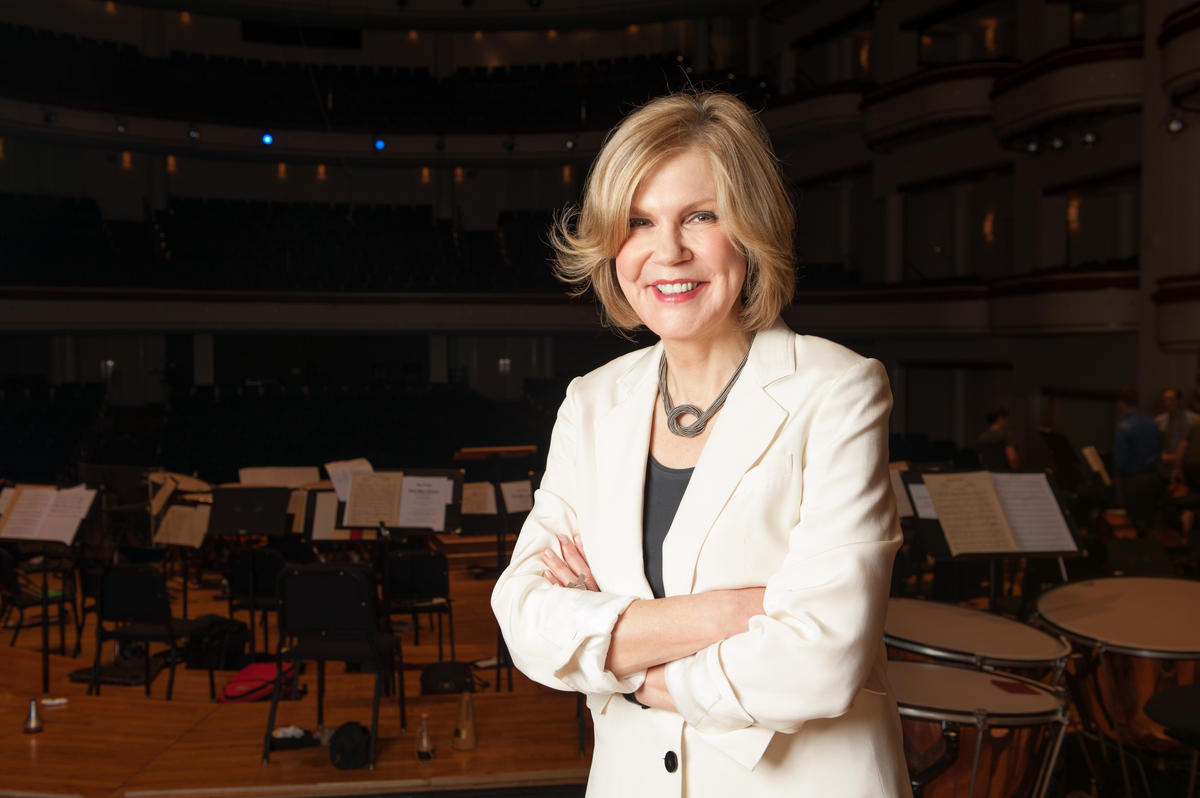 Mary Deissler,credit Justin Driscoll
That something else was arts management, a profession where she could provide jobs to the artists she admired. Most recently, Deissler was the president of the Chicago Academy of the Arts.
What excited her about the position in Charlotte was the talent of the orchestra and the role the symphony could play in the community.

That means reacting in real time to the needs of the community. In the aftermath of the Keith Scott shooting and the protests in Uptown the symphony changed course. It canceled its planned show and instead produced "One Charlotte: A Performance for Peace."

The symphony now does a brewpub series at NoDa Brewing Company. Recently the organization hired its first artist-in-residence violinist Mark O'Connor to explore more Americana endeavors.
"In the past the symphony orchestra has been prone to say 'look there's this great program we already made for you aren't lucky you're going to get it?' We've spent a lot of time talking to groups throughout the city ranging from the Alzheimer's Association down to various schools to the churches asking what could we do, how could we help? What kind of need to you have?" Deissler said.

And going out into the community is one of the ways to address the biggest challenge the symphony faces. The biggest misconception about the symphony she says is that it's for "rich old white folks."
" There is something here for everyone and we need to figure out a way to relay to folks and get people to understand that it's not going to be stuffy boring stuff. We do things that are beautiful and move you. We can also create real dialogue. Music speaks when words fail," she said.

Another challenge Deissler faces is the end of an annual $2 million Thrive grant which expires in three years. She explains why it's hard to keep a symphony is good financial standing:
"We've run 'save the symphony' campaigns and people tune you out after a while. There is tons of great stuff happening at the symphony and we need to talk about those positive messages."
Ticket sales account for only a third of the symphony's budget which means the organization relies on donations to fill the rest. Deissler says they have a plan to dramatically increase ticket sales next year:
"We're going from 10 to 12 classical sets of programs and then figuring out how do you create a mixture of programming that include a couple of the greatest hits a Beethoven's 9,  Valvaldi's Four Seasons. But also some interesting and different partnerships, some new work, some pieces people might not have heard before, some really fantastic guest artists. You figure out how to put them in packages that are exciting and affordable  Often times people come on the first date and we never invite them to come back for a second date. We have to ask them for the second date."

Deissler says this is a lot of change, and change can be hard. "People need to want to be on this journey with us. We must make the symphony strong, financially viable, and relevant to the community. That's a shift for some people and that's ok if it's not the right job for folks, it's important to have the right people on the bus," Deissler said.

As for Deissler personally, she says she's settling into Charlotte life nicely. She lives in Uptown and likes to paint. She's currently planning a mural for one of her walls. She still plays the piano, just for fun around the holidays. And music always plays a rolein her life, and helps when she's stressed, Bach and Bruce Springsteen are two staples for her.

At a rehearsal for Brahms v. Radiohead, a mash up of two very different genres, it's easy to hear those changes Deissler is making, even though she's not in the room. The musicians look like they're happy for the new challenge, one that will hopefully prove to fill seats and bring in a loyal--and new crowd.

Listen to the original story here.