As a volunteer chorus, the members of the Oratorio Singers of Charlotte put in a lot of hours rehearsing for concerts. We work hard at it. We do it, of course, because we love it and because we get something out of it. In exchange for the time we spend driving to and from rehearsals and the actual hours spent in rehearsal, we get to sing some of the finest music ever composed. We work with world-class conductors. We meet interesting people who share our love for music. We sing with the Charlotte Symphony Orchestra.

It's a fair trade. 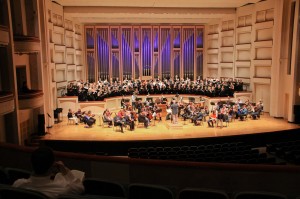 And then, sometimes we get a night where the conductor, the symphony, the chorus and the soloists are all in sync, the house is full, and the audience is engaged. When that happens, the experience can be magical. Of all the arts, music alone, I think, has that singular ability to so collectively elevate the human spirit.

I think we experienced that twice this past weekend. 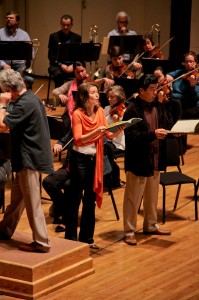 At the post-concert talk after Saturday night's performance of Mozart's Jupiter Symphony and Requiem, a member of the audience noted that she had been attending concerts that featured the Oratorio Singers of Charlotte for about 15 years. She wanted to know why we sounded so much better in this performance than she had ever heard before.

Scott Allen Jarrett,  Director of Choruses and Assistant Conductor of the Charlotte Symphony, primarily credited our musical growth to the commitment of the Charlotte Symphony to the Oratorio Singers and to its ongoing commitment to the choral repertoire.  (He was right, though his own commitment to Oratorio Singers should have been included as well.) We are, in fact, larger in number than in recent years (about 150-strong), and I do think our quality is on the rise. One aspect of that quality is having enough mastery of the material to be able to respond to the spirit of the moment--and of course, the direction of the conductor--during a live performance. 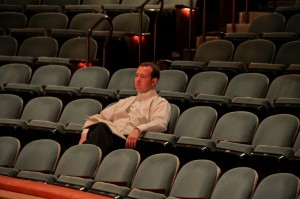 Christopher Warren-Green obviously has the musical standards, knowledge and sensibilities one would expect from a conductor of his pedigree. He also makes himself available to moments of inspiration on stage. One could argue that this is in fact the essence of a live performance, but not all conductors allow themselves the same level of expressive freedom. Warren-Green does. And for a chorus that has sung only a couple times under his direction, this can be a scary notion.

It can be a bit nervy for the conductor as well. Getting an orchestra to perform with four soloists and a large chorus requires a lot of trust on his part. Trust that wherever he leads, they will have not only the technical ability, but also the musical instincts to follow. I think Christopher Warren-Green trusts his orchestra. Soloists can be a tricky proposition, especially when much of their performance is ensemble singing, as it is in the Requiem. Soloists are, by definition, individualistic. (That's not a knock. It's who they are.)

And then there is the chorus. If the conductor doesn't trust the chorus, he will reign in his musical muse in order to preserve the integrity of the music. The result is a competent concert, but not a transcendent one. So within our preparation for a concert, we don't just learn the music as indicated in the score. Scott Allen Jarrett has us practice different endings to movements, different tempos and dynamics, different interpretations of key passages, even different ways to produce vowels. By the time rehearsals began with the orchestra last Tuesday, we had developed the confidence to not only sing well, but to deliver what Maestro Warren-Green was asking of us. And if he wanted to try something else, we could produce that as well.

So this past week weekend, the result was two great concerts. The soloists did marvelously, the orchestra did its usual excellent job, and I think the chorus gave Maestro Warren-Green enough confidence to follow his muse without having to worry about whether we were going to come along. The house was full, and the audience each night was both engaged and receptive to the music. The result? Two special nights enjoyed as much by those of us in the chorus as by those in the audience.

Preparing for The Creation

That is tonight's instruction from our director, Scott Allen Jarrett, as he prepares the Oratorio Singers of Charlotte to perform Franz Joseph Haydn's The Creation(Die Schöpfung) with the Charlotte Symphony Orchestra on November 19-20.

With just a little more than three weeks until the performances, tonight's rehearsal is a physical and mental workout. A successful performance, as with most things in life, lies in the details. That takes work, and even more so with the classical style of Haydn.

Just the other day, I was reading through one of the classical music discussion forums on amazon.com that questioned why Haydn doesn't engender the same kind of passion from classical music lovers that the Romantic era composers seem to.

One contributor surmised that Haydn's music, while beautiful, engaging, and at times profound, rarely touches the sublime. His theory was that to our post-Romantic ears, the classical style doesn't deliver the dramatic tension and release that we crave and typically get from the music of the Romantic era composers. In other words, we love our emotionally-fraught Beethoven and Tchaikovsky, but Haydn is just too...organized. It's nice to listen to, but it never really soars.

Apparently, that contributor has never listened to The Creation. Considered to be Hadyn's masterpiece, The Creation is beautiful, profound, and yes, sublime. The oratorio consists of thee parts. Part I unveils the creation of light, the earth, the heavenly bodies, water, weather, and plant life. Part II unfolds the creation of sea creatures, birds, animals, and lastly, man. Part III celebrates the happy first days of Adam and Eve in the Garden of Eden. The oratorio kicks things off with an overture representing chaos. Its initial notes are devoid of perceptible melody. Gradually one instrument after another attempts to extract itself from the chaos, and a sense of order emerges. As the discordance settles, the music gently illuminates the spirit of God moving over the waters. Then, God commands that there to be light, and in response the orchestra and chorus burst forth with the joyous reply, "und es ward Licht!" -- and there was Light! Brilliant. And that's just the overture.

Haydn began composing The Creation in 1796 at the age of 65, after a highly successful tour in England. While in London, he attended several performances of George Frideric Handel's oratorios. These large scale works inspired Haydn, and The Creation became his most personal composition. A deeply religious man, Haydn no doubt reveled in the opportunity to compose something that would enable people to enjoy a musical representation of God. He would later remark, "I was never so devout as when I was at work on The Creation. I fell on my knees each day and asked God to give me the strength to finish the work." Haydn appended the words "Praise to God" at the end of each completed section.

He completed The Creation in 1798. It was the longest time he had spent on any of his 750+ compositions. When urged to bring it to a conclusion more quickly, Haydn replied, "I spend so much time over it, because I intend it to last a long time." In fact, he worked on the project to the point of exhaustion and collapsed into a period of illness after conducting its highly successful premier performance in Vienna.

"Picture an old television set. If you get close enough to the screen, you can see the individual pixels. Step back, though, and you see the whole picture."

The Oratorio Singers and the Charlotte community are extremely fortunate to have Scott Allen Jarrett. His musical taste is impeccable, but he also has the unique ability to convey both the necessary specific musical instruction and the insight into the larger context of the music -- the pixels and the picture if you will. That he does so engagingly and without a trace of personal ego is probably even rarer. (If I had his talent, I'm pretty sure I would have the ego to go with it.)

"...Men, you have to stop the tone at the dot. If you sing into the 16th note, you can't articulate the note and the whole passage gets bogged down...."

Details. Pixels. The classical style of Haydn demands it. The actual notes may not be as hard to sing or to play as those of other composers, but the precision required to perform them successfully is probably more difficult to achieve.

The Oratorio Singers of Charlotte is composed of professional singers, musicians, music educators, music students, and amateur singers like myself who have had musical training but don't make our living in music. It's Scott's job to bring us together as a cohesive ensemble.

He makes a point of apologizing to the chorus for the TV/pixel metaphor, but as with all his illustrations, it's spot on. As he says, it's very difficult for an individual to extract the kind of skill required to honor what is in the score -- to execute the details that unleash the sublime. It's even more challenging to produce that as an ensemble. So our rehearsals are spent developing the focus, the agility, the cohesiveness, and the attention to detail that are required to deliver all the subtleties and all the glory of this music. Individually, we are charged with the responsibility to sing accurately -- in tone, rhythm, diction, dynamics, and emotion -- and to be available to the music and to the director.

To be a pixel. Singularly precise, but part of a bigger picture.

Like I said, it's physically demanding. At the end of rehearsal, my feeling is that of one who has just had a good workout at the gym. Spent, but also fully engaged and energized in body and spirit. And what a thrilling experience it is when you get a glimpse of the big picture. When all the individual voices work together to create a glorious musical portrait of nothing less than the creation of the world. No, not thrilling. Sublime.

My only regret is that I won't be in the audience to hear the whole "picture." But you can, and you should. If you think the music of Haydn doesn't have a place in your life, come and let The Creation change your mind. It will, and you will be forever glad that it did.

Born and raised in Aurora, Illinois, Tim Parolini grew up listening to a wide range of music, but mostly classical, jazz and blues. A graduate of Aurora University, he studied voice with Mr. Sten Halfvarson and performed with the Fine Arts Chorale under the direction of Dr. Elwood Smith. His fond memories of attending concerts as a youth include many Chicago Symphony Orchestra performances under the direction of the late, great Sir Georg Solti. Tim runs a brand marketing and design business that specializes in helping niche-oriented businesses and nonprofit organizations identify and effectively communicate their brand value. He is excited to be participating with the Oratorio Singers of Charlotte and currently serves on its board.
Read more