The practice of practising

March 11, 2014
The following article appears on Stephen Hough's blog for The Telegraph and in the November/December issue of International Piano magazine. 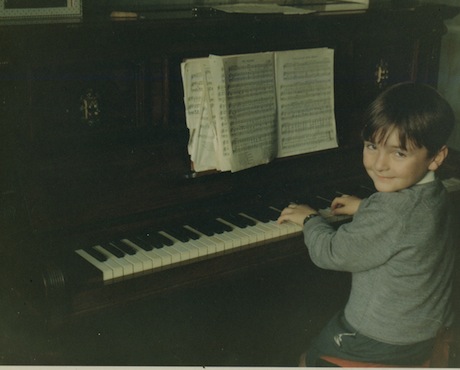 Concert pianists spend much more of their lifetimes practising than they do playing concerts. It's not just that pieces need to be kept in the memory (muscle and mind), but the very act of playing the piano is physical and athletic. It involves reflex and endurance. It may be true that you never forget how to ride a bicycle, but if you and it are rusty there's not much hope of winning or even completing the Tour de France.

So we need to practise. But the key is how we make our time offstage best serve our briefer time onstage. A pianist who plays many concerts has little time to spare so it's important that those spare hours, even minutes, are used well.

My teacher, Gordon Green, used to say, "in practise a perfectionist, in performance a realist". In other words, prepare assiduously, tirelessly at home, but when onstage accept the situation at hand without wishing the piano were more in tune, the audience were more appreciative (or larger), you hadn't made a mess of that octave passage and so on.

But being a "realist" sounds rather prosaic when faced with bringing to poetic, passionate life the masterworks of master composers. I might put it differently from Gordon: in practice an engineer, in performance a pilot. Nuts and bolts in a plane are incomparably important, but when you sit at the cockpit of a Steinway concert grand your eyes need to look ahead not underneath.

The purpose of practising is so that we (offstage as engineers) make sure that we (onstage as pilots) are completely free to fly to the destination of our choice. That destination is one involving imagination and creativity and spirituality and danger and ecstasy of course, not merely the A to B of playing the notes, but without the nuts and bolts in place we will never be airborne. The greatest interpretative vision of the final pages of the final sonata of Beethoven will nosedive to oblivion if we can't play an even trill.

So, moving inside the hangar, spanner at the ready, how do we practise? There are as many answers to that question as pieces in our repertoire, but maybe some signposts can help:

Study
Relish the task, whether beginning to learn a piece or whether revising one long familiar. Examine the score like a rabbi poring over a rare parchment. Decode the message behind the notation. Map out the journey. Look for the obstacles. Know the (good) tradition of historical evidence; distrust the (bad) tradition of 'its always done like this'. You may be Brahms's secretary in the practice room, but on stage you are his mouthpiece. And a composer's message is always more than words: it's a drama in which you and Brahms are as one character.

Finger
When starting to learn a piece I always write in fingerings. It aids memory, it emphasises the act of study, it discourages a sloppy "sight-read till ready" attitude, it forestalls nerves in a performance, it personalises the score. In the early years of a career we can be asked to step in at the last moment for a colleague who has cancelled. I remember an occasion when I was in my early 20s getting a call to play Bartok's 3rd concerto with the Chicago Symphony and Esa-Pekka Salonen. There was about a day's notice and I hadn't played the piece for a couple of years. I could accept the date because the nasty, twisting passage towards the end of the third movement was fingered and thus still in my motor memory. It saved me a couple of hours work when I only had 24 hours to pack my bags and fly across the Atlantic.

Dissect
We need to know what might go wrong in a performance and why. There is no such thing as a difficult piece. There are merely moments in pieces which are problematic. The notorious coda of the 2nd movement of Schumann's Fantasie op. 17 is a good example: 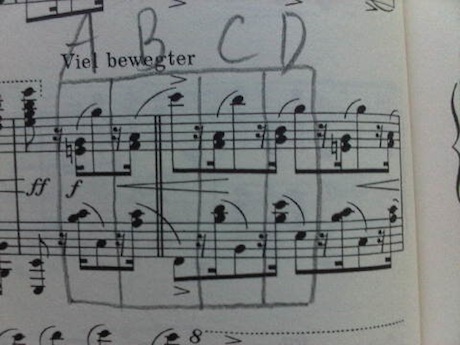 A is easy for the left-hand, moderately tricky for the right; B is hard for both hands; C is a little easier for both because the 5th fingers land on black notes; D is easy for both. To face this passage like a rabbit looking into the headlights of an approaching car is totally counter-productive. We do not face a steamroller. There are four wheels (or two which are parallel) and if the rabbit is not in the line of these it can scamper off into the forest unscathed.

Slow
Slow practice can be a complete waste of time if the mind is not working quickly. Simply to trawl through passages like a contented tortoise is a waste of the felt on your piano's hammers. Good slow practice is more like a hare pausing to survey the scene sharp in analysis, watching through the blades of grass, calculating the next sprint. My favourite kind of slow practice is the half and half variety. For example in a semiquaver passage I will play four notes at performance tempo then four notes exactly half the speed then reverse the groups. It can sometimes be useful to do this with eight-note groups. It stops any tortoisian ambling and it focuses the mind quickly from one reflex to another. It is a hare with alert eyes.

Audience
There are two dangers to avoid in practising, firstly not to play as if you're onstage, filling the hours crashing through pieces without improvement. This is a common occurrence in conservatories Rachmaninov concertos pounded with adolescent passion and coarse, crude effects. But the second, more subtle danger is not to get stuck in a practising mode. This is related to mindless slow practice. All the focus when in the practice studio should be how we will play when in the concert hall. If something comes apart, don't stop immediately. Guide the skidding wheels around the crashing corner for another meter or two, despite the sparks and screeches. A common student scenario: music flying along; train wreck; a second of silence; start at point of accident; continue. The point where things broke down is the fragile spot, the dodgy seam. It needs sufficient overlap of material to be strong. Go back before the mistake and practise beyond the mistake then the mistake itself will be more safely repaired. Otherwise the very stopping and starting becomes a reflex an ingrained repetition of breakdown.

Mind
As important as it is to have strong fingers muscles, tendons, joints loose and lithe we need a strong mind too. Strong in concentration, on and off stage; ever striving for improvement, but relaxed when none seems to take place; aiming the dart tirelessly at every bullseye, but gentle and kind when it clatters to the floor. Muscles are effective when they are able to tense and relax at will, not just when they bulge in a ripple of aggression. This is true for the physical side of playing as well as for the mental challenges. The mind's clear vision is not a stare: it needs to be able to focus near and far with flexibility and wisdom.

There is a well-worn saying: practice makes perfect. I don't believe this, at least in reference to playing the piano: abstract "perfection" is rarely what we seek; but good practising makes it more likely that we will give a good performance. Its attention, its concentration, its tightening of the screws enable the concert experience to take wing in freedom.
Stephen Hough performed Schumann's Piano Concerto in A minor with Charlotte Symphony on March 14 & 15, 2014. We were delighted for this artist's seventh appearance with us.

These are the most enlightening comments on practice I have ever read. They will make my available time at the keyboard so much more useful. Please accept my grateful thanks