A full-fledged symphony orchestra feasts eyes as well as ears. Stringed instruments, reflecting the stage lights, glow deep reddish-brown. Bows move back and forth in perfect time, while harmonies dance from place to place within the space the sound creates first here, then over there, then back again.
The students, clapping with the beat, become a joyful blur of sound and movement. 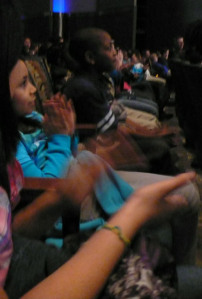 True to the concert's theme "
Rhythm Around the World" conductor Jacomo Rafael Bairos is guiding his audience through a landscape of waltzes, marches and classical tunes, illustrating beat and rhythm with pieces by Stravinsky, Grieg and Sousa, as well as Beethoven. The students moved cautiously at first, leaning forward to catch the unfamiliar rhythmic patterns. But confidence built quickly, and they now stomp and clap with gusto.

Bairos drops his hands and brings the music to a stop. Then he lifts his baton again, and the sounds pour out once more still Beethoven's composition, but patterned to a hip-hop beat. The students quickly catch this more familiar rhythm, and began to move with even greater zeal, throwing hips, shoulders, heads and arms into their response. 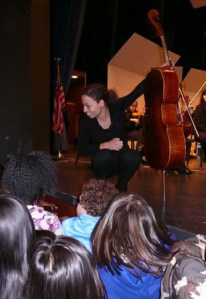 When at last the music stops, the audience heads for the exits all but the Shamrock students. All our students play in Shamrock's orchestra, and organizers have arranged some special treats.

Before the concert, the students got to meet Joy Payton-Stevens, a cellist who visited Shamrock back in the fall. Now, as the students from other schools reach the doors, Bairos appears in front of us, smiling and high-fiving and ready to answer questions. The kids beam, and shoot their hands into the air. When did he start playing music? Is it scary to be up in front of all those people? They learn he started out when he was just their age, and there is nothing he loves better.

Gerald Turner, a longtime member of orchestra sponsor St. Luke Methodist Church, happily photographs the scene. He's been to plenty of musical events over the years, he says, but he's never seen a symphony orchestra before. He can't get over how wonderful it was, how perfectly all the musicians played together. Amazing. 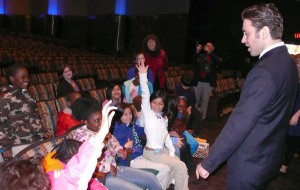 Back outside, the students chat and pose for pictures as they wait for the bus. It's been one of those school days that you don't forget your friends, the sun's warmth, the way you clapped and swayed in the embrace of extraordinary music. What a great day to be young. What a sense of possibility. What an achievement to aspire to. 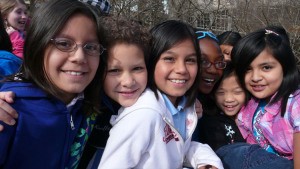 But as the glowing kids line up to board the bus, I think about the testing season that will soon be upon them, how pinched and sad those lists of carefully vetted questions will seem next to the marvel of Beethoven's Fifth. What slice of this experience could be mechanical enough to reduce to a multiple-choice answer?

How many beats per measure are in a waltz?

In what year was Ludwig van Beethoven born?

If some children mark more of these answers right than others, what does that tell you about them? And in this era of pay-for-performance, what does it say about their teacher?

Later, I try to imagine the kind of question a good teacher would ask her students.

Which word best describes the way you felt while listening to Beethoven's Fifth Symphony?

a. Exuberant
b. Tempestuous
c. Funky
d. Wakazoo! (this last courtesy of Parker)

In the standardized test world, of course, a question like this would never make the grade. Sadly, none of these marvelous words is the one right answer. It depends on the person, on the performance, on a hundred other variables. It calls on students to discuss, explain, weigh different points of view. Just like in literature. Just like in life.

But these days, when achievement has become an educational obsession, standardized test scores seem to be the only thing that matters. They determine which students pass, which schools are closed, which teachers are rewarded. When someone talks about achievement, they are almost always referring strictly to test scores. We seem to have forgotten how remarkably limited they are, what a small slice of education they represent.

Of course, these tests have one, powerful advantage that fits them to the Darwinian conditions of today's educational surroundings an advantage has allowed them not merely to survive, but to thrive and multiply.

Unlike a great symphony, or a marvelous piece of writing, the bubble patterns test-takers create can be turned into numbers.

Once you have a set of numbers, they take on a life of their own. You can line them up in impressive columns, top to bottom. You can extend them out to multiple decimal places, creating the illusion of ultimate precision. You can set numeric goals for schools to reach or face the consequences. You can create salary scales that slice your teaching staff into neat quartiles of "effectiveness."

And after a while you can forget that at the heart of this quantitative extravaganza lies a child sitting in a classroom, penciling circles in answer to the limited range of questions that can be pressed to serve the multiple-choice format. You learn something from the scores those patterned circles generate, but not as much as everyone around you imagines that they signify. Lost in the chase for just the right array of calculations, the magic matrix of accurate assessment, you have ceased to notice just how little this mathematical emperor is wearing.
Pamela Grundy is a parent at Shamrock Gardens Elementary School. Her blog is Seen from the Rock.