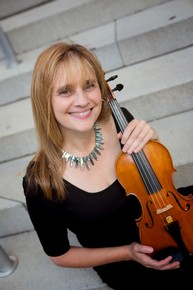 Susan Blumberg has been a member of the Charlotte Symphony violin section since 1987. Growing up in the DC area and a graduate of the Peabody Conservatory of Music in Baltimore, Maryland, Ms. Blumberg was a recipient of the full-tuition Liberace Scholarship in 1981-82. She has participated in music festivals such as the Schneider Seminar and Spoleto in Charleston, South Carolina and in Italy. She has played with the Baltimore, National and North Carolina symphonies. Earlier in her career, she played in the OFUNAM Orchestra in Mexico City. She has been a member of Carolina Chamber Players since 1988 and teaches privately. Since 1993, Ms. Blumberg has been designing a program to teach violin to special needs children and works with the students at the Metro School in Charlotte. Her favorite pastimes include reading, playing chamber music, and spending time with her friends.