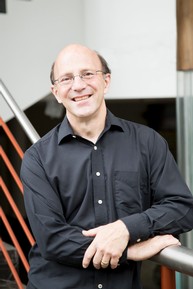 Richard Goldfaden, fourth horn player for the Charlotte Symphony, has been playing with the orchestra for over three decades. He earned his Bachelor of Music-Performance from the University of Michigan. While still in school, Richard won the position of second horn in the Toledo Symphony and continued playing with them after graduating. Richard's next position was principal horn with the OFUNAM in Mexico City. He remained there until he became a member of the Charlotte Symphony. Besides performing with the Symphony, Richard enjoys a wide variety of outdoor activities including running, bicycling, hiking, kayaking and relaxing by the lake in Northern Ontario. Richard composes and arranges music for various small ensembles, including several works which have been published. He also sings tenor at Trinity United Methodist Church in Kannapolis, where his wife, who is also a professional musician, is Director of Music and Worship Arts. While at home, he enjoys the company of his two rescue dogs and rescue cat.