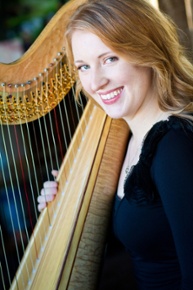 A native of New Jersey, Andrea Mumm Trammell holds the Dr. Billy Graham Principal Harp chair of the Charlotte Symphony Orchestra. Praised for her ability to “handle filigree solo passage with aplomb” and her “serene…and sweetly swoony” playing by the Charlotte Observer, Andrea is regarded as one of the top harpists of her generation. Andrea has performed with the Colorado Music Festival, Civic Orchestra of Chicago, National Repertory Orchestra, Peninsula Music Festival Orchestra, Mercury Opera Company of Rochester, and the Brevard Music Center Orchestra in addition to having toured extensively throughout North and South America as Principal Harpist with the Youth Orchestra of the Americas.

As a competition winner, Andrea has been featured as a soloist with numerous orchestras and is in demand as a chamber musician. In the 2014 CSO season, Andrea was a featured soloist and performed the Danse sacrée et danse profane by Claude Debussy and Mozart’s Concerto in C Major for Flute and Harp with colleague, Principal Flutist, Elizabeth Landon. Andrea was a finalist for the American Harp Society National Solo Competition in Salt Lake City, Utah and is also a two-time winner of the American Harp Society (North Jersey Chapter) Solo Harp Competition. As harpist in the Eastman Opera Theatre orchestra, she recorded Bon Appetit!, a CD of vocal music from American composer, Lee Hoiby, under the Albany Records label.

In Charlotte, Andrea is a highly sought after teacher. She was recently appointed to the teaching position of Lecturer of Harp at University of North Carolina Greensboro (UNCG) as well as Adjunct Harp Instructor at Davidson College. Andrea also maintains a private teaching studio and has served as a judge for the Young Artist’s Harp Competition.

As a music educator, Andrea is a guest lecturer, coach, and performer for the youth orchestra, NEOIJIBA in Salvador, Brazil as well as the Fundación Sinfonía Youth Orchestra in Santo Domingo, Dominican Republic.

Andrea began her pre-college harp studies at the Manhattan School of Music. She holds her Bachelor of Music degree as well as a Performer’s Certificate from the Eastman School of Music and her Master of Music degree with Program Honors from Northwestern University. Andrea has also studied at the Chicago College of the Performing Arts. Her teachers included Susan Jolles, Kathleen Bride, Elizabeth Cifani, and Sarah Bullen.

First season with the Charlotte Symphony: 2012

Career highlight: Winning the principal harp position with the CSO!

Do you have any hobbies?
Yoga, baking, card games, frisbee, pool, salsa dancing, and board games.

What is your favorite thing about Charlotte?
The warm weather and the friendly people!