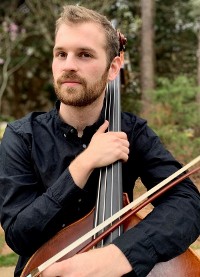 Recently appointed Assistant Principal Double Bass of the Charlotte Symphony, Judson Baines began playing music at the age of 9 with the electric bass before picking up the double bass in his public school system at the age of 11. A native of North Carolina, he was born in Wilmington and raised in the Raleigh area, where he began his private studies with Bob Anderson of the NC Symphony.

Judson received his Bachelor’s Degree in Double Bass Performance from the University of North Texas in 2019, studying with Jeff Bradetich. Afterwards he pursued a Master of Music degree for a year studying with Timothy Pitts at Rice University’s Shepherd School of Music before winning his position with the CSO. Additional mentors include Paul Ellison, Craig Brown of the North Carolina Symphony, and Paul Sharpe, with whom he studied for a year at the University of North Carolina School of the Arts high school program in Winston Salem, NC.

Judson has spent several summers at music festivals across the country including the Aspen Music Festival, Brevard Music Center, and the Wabass Institute for the 21st Century Bass Player, where he worked with Hal Robinson, Eric Larson, and Ranaan Meyer. While in school, he performed with the Fort Worth, San Angelo, and Shreveport symphonies.

Outside of the orchestra, Judson loves to spend time with his family and friends. He also enjoys being outdoors, whether running, hiking, or biking. Having a keen interest in the music of J. S. Bach, Judson loves to explore creative solutions to navigate through the technical challenges that adapting his music to the bass (and other instruments) presents. He continues to play electric bass regularly and has an interest in writing music. He looks forward to continuing to learn and further developing himself as a musician with his colleagues in the Charlotte Symphony.

Where did you grow up?
I was born in Wilmington, NC and grew up in the Raleigh area. I've spent a considerable amount of time in the mountains of western part of the state, as well as the coast, enjoying the merits of living in North Carolina throughout my life!

What do you look forward to most about living and working in Charlotte?
I think it's really awesome that I can be in my home state and have my family easily visit me and vice versa, so I'm really looking forward to that. I would also say meeting new people is a huge thing for me. I love people and I really like to have genuine connections with good people.I love to be outdoors, so I will definitely be scoping out places to hike and bike, which I've heard there's plenty of in Charlotte. With pretty much any city, it's always fun to explore all of the food and entertainment that gives it its character, so there's that too!

What else should we know about you?
I would love the audience to know that I am genuinely so excited to join the CSO and play music with other people again after a long hiatus due to the virus!