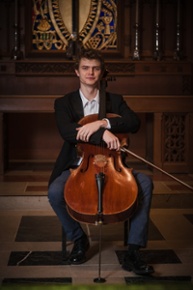 Drew Dansby, 20, is a third-year double-degree student at Oberlin College and Conservatory, studying cello under Darrett Adkins and chemistry. In the 2021-22 season, Drew joins the Charlotte Symphony as Acting Section Cellist. Recent honors include receiving the Tuesday Musical Scholarship for Strings in the Tuesday Musical Association’s 2021 scholarship competition and winning both the Gold Medal and the Agnew Prize for Bach in the Cleveland Cello Society’s 2021 competition.

Drew was a member of the National Youth Orchestra of the USA for three summers, including as a violinist in 2018 and as principal cellist in 2019, and he was the first member in the history of the orchestra to be accepted on two instruments. In NYO-USA, he played under Maestra Marin Alsop and Maestros Antonio Pappano and Michael Tilson Thomas. In December of 2019, Drew sat associate principal cellist of the New York String Orchestra under the direction of Jaime Laredo. Last summer, Drew was a young artist in the virtual Kneisel Hall Chamber Music Festival.

Drew is dedicated to sharing music with the community. He was a founding member, violinist, and cellist of the Charlotte Youth String Quartet, which for two years offered seasonal community concerts fundraising for charity. Drew served as Artistic Director of Melodic Minors, a 501(c)(3) nonprofit organization, coordinating volunteer musicians and repertoire for dozens of concerts at nursing homes, hospitals, after-school programs, and fundraisers. Drew is an active cello teacher; he currently teaches for Through the Staff, a national volunteer organization offering free music lessons to students who don’t have access to private instruction.

At Oberlin, Drew was a violinist in the Phlox Ensemble, a group committed to performing works by women and nonbinary composers and is an artist in the Scared Heart Concert Series. In January 2021, as part of SHCS, Drew collaborated with Oberlin studio mate Simon Housner to perform the complete Bach Cello Suites. Drew also co-founded Ambrosia, a collaboration between Oberlin students of classical, jazz, and non-Western music to learn from each other and bridge genres.

How were you introduced to music and the cello?
My parents, neither of whom played an instrument, started me on violin lessons on my fourth birthday after I begged them to start playing when I saw a violinist perform at our church. Six months later, I saw another student having a cello lesson before me, and I begged my parents again to add cello. My teacher rented us both instruments and split my lesson time into half violin and half cello. I continue to play both instruments to this day!

What do you look forward to most about living and working in Charlotte?
I'm really looking forward to spending a year in my hometown with family very close, and exploring more of this constantly changing city. I grew up going to CSO concerts and already feel like I know so many of the people, and it's surreal to finally get to join the orchestra myself. It will also be pretty intimidating to be colleagues with many of the musicians I studied with and was coached by when I was a kid.

What do you do for fun when you're not performing/practicing?
I'm an avid reader, and I also love spending time in nature, doing Sudoku puzzles, volunteering for Crisis Text Line, and continuing my quest to find the best chicken and waffles in Charlotte.