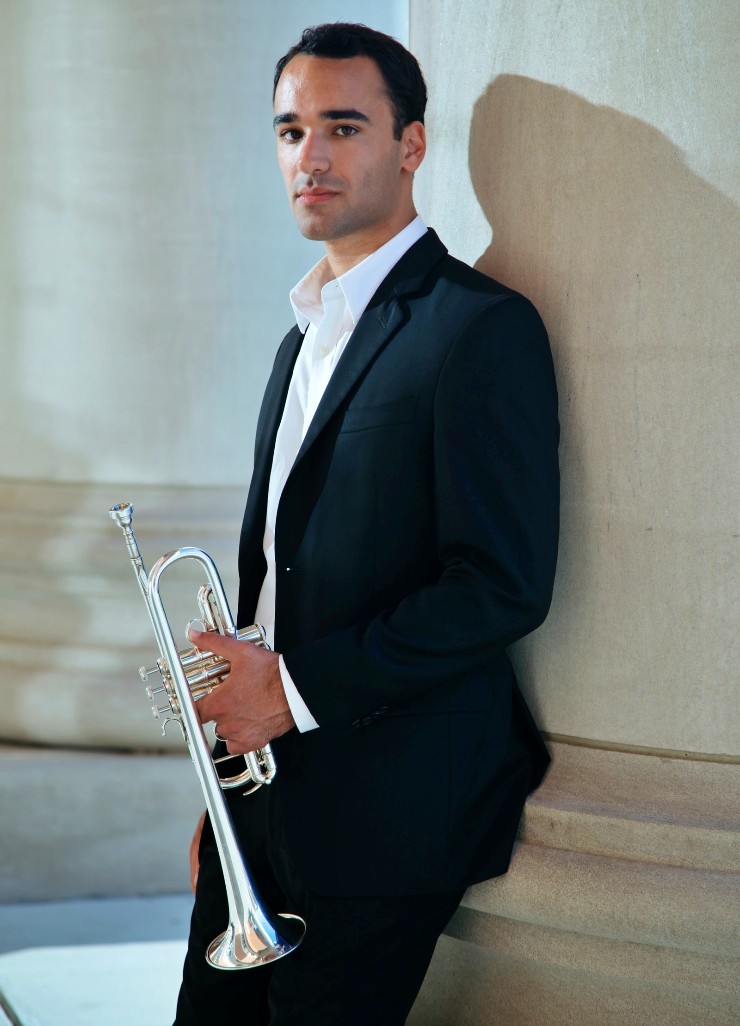 At the end of second grade, Gabriel’s parents urged him to follow in his older siblings’ footsteps and begin taking music lessons. He chose the trumpet, and a few days later his mother brought home a rented student-model Yamaha. Gabriel will never forget the initial sensations of picking it up for the first time -- the sparkle of the lacquer, the buttery action of the valves, and the aroma of the oil.

His initial enthusiasm for the trumpet lasted for about a month, at which point he decided to quit in order to pursue the dual career path of pro hockey player and video game tester. But his parents imposed two hard rules: first, no quitting before he turned age 16, and second, daily practice. Perhaps this was because of their own failed musical experience: Gabriel’s father played trumpet for three years in the 1960’s before his teacher, a member of the Pittsburgh Symphony, told him he’d be better off quitting, and his mother had a short-lived and unhappy exposure to the accordion.

So Gabriel stuck with it, and the summer before entering high school attended a summer brass camp run by the Maryland-based Monumental Brass Quintet. There, he began practicing and listening to trumpet for hours each day, and soon realized that he wanted to play professionally.

In 2016, Gabriel received a Bachelor’s Degree in trumpet performance from Rice University and has since performed with a variety of leading ensembles, including the orchestras of Atlanta, Washington, DC (National Symphony), Houston, Richmond, and Utah, plus the Mercury Chamber Orchestra. He has also performed in the summer as principal trumpet with the Bravo! Big Sky Music Festival, in Big Sky, Montana.

Gabriel has had many great teachers, including Josh Keller, David Levin, and Pat Whitehead. At Rice, he was a student of Barbara Butler and Charles Geyer, and he has recently studied extensively with Martin Angerer.

Outside of orchestra, Gabriel likes to cook delicious food, play pickup basketball without rebounding, and play trumpet in friends’ bands. Prior to joining the Charlotte Symphony in 2020, he spent two years living in the beautiful state of Utah.

How were you introduced to music and the trumpet?
My parents both value music and it was important to them that my siblings and I all learn instruments. My two older sisters played the piano and my older brother played the violin. My earliest musical memories are of hearing them practice every day, overhearing their lessons and recitals, and listening to the classical station on every car ride. As the youngest, I think I picked the trumpet because I wanted my instrument to be louder than theirs. My parents are fans of Louis Armstrong and Herb Alpert, so I had a little bit of awareness of these great trumpet players before starting.

What do you enjoy about living and working in Charlotte?
I really like the people in this orchestra. There is a very high level of playing here, but it's also like a family. The musicians here really stretch themselves and take risks in concerts. I love closing my eyes during a rest in a concert and pretending I'm an audience member, and I can't wait to be onstage again. The first concert back is going to be absolutely electric. I'm happy to live in a city where people value live music. The Charlotte Symphony has a wonderfully supportive audience.

Do you have any hidden talents?
I can name all the US presidents in less than 10 seconds.