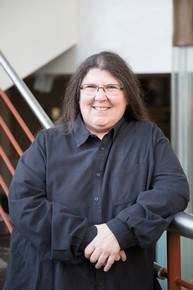 Bassoonist Lori Tiberio was born and raised just outside of Pittsburgh and began her artistic life with tap and ballet lessons at the tender age of two. She credits those early lessons with giving her a sense of rhythm and love of music. She began piano lessons at the age of six and the guitar in the 7th grade. Her father was self-taught on the guitar and piano and Lori received much encouragement from her family in her musical studies. Lori went to Catholic schools through the 8th grade and sang in school chorus. In 9th grade, Lori transferred to public school and started to play in the band. She had begun studying the clarinet and saxophone the previous year, but dropped the clarinet in order to concentrate on the saxophone, which was her first love. She played lead alto sax in jazz band throughout high school and college.

The bassoon in high school was a secondary interest, as her concert band needed a bassoonist and Lori agreed to give it a try. In 11th grade Lori took private bassoon lessons with a music student at Duquesne University, as she realized this would help her get into music school. Bassoon became her major at Carnegie-Mellon because she had received a scholarship to study the bassoon (Her first love was still the saxophone). Lori's bassoon teacher at Carnegie-Mellon was Arthur Kubey, principal bassoonist with the Pittsburgh Symphony. Under Kubey's inspiring tutelage, Lori fell in love with the bassoon and symphonic music. In her sophomore year, she quit the sax to concentrate on the bassoon. Lori holds BFA and BME degrees from Carnegie-Mellon and taught counterpoint and composition for one year at Butler HS in Pennsylvania after graduating.

Lori has been with the Charlotte Symphony for close to 25 years and her duties include playing the bassoon and the contrabassoon. She learned to play the contrabassoon "on the job" and plays on an instrument purchased by the Charlotte Symphony Women's Association (now the "guild"). She teaches at UNCC, coaches the wind section of the CSO Youth Symphony, runs the Providence Chamber Music series and maintains a studio of private students. She is very proud of the fact that her students always excel in competition, having earned 1st and/or second chair positions in all ALL State categories since 1994. Lori's favorite pastimes (when away from the bassoon) include gardening, birding, cooking, camping and spending time with her beloved dog, Bucks. She is also a member of Reid's wine club.