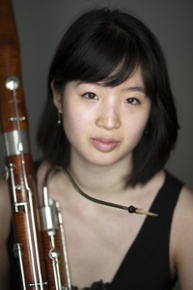 Bassoonist Naho Zhu received her Master of Music degree from The Shepherd School of Music at Rice University under the tutelage of Benjamin Kamins in 2016, and received a Bachelor of Music in 2014 from the Juilliard School where she studied with Patricia Rogers. Since completing her studies, she has established herself as a freelance bassoonist and educator in Boston, performing as a substitute musician with the Boston Symphony Orchestra, and as a regular member of the Boston Philharmonic Orchestra and Boston Landmarks Orchestra. Additionally, she has performed with the New York Philharmonic, Houston Symphony, and members of the Berlin Philharmonic in a chamber music series. She enjoys coaching the young musicians of the Boston Youth Symphony Orchestras and teaching privately. Naho has also participated in several prestigious summer festivals including Tanglewood Music Center, Music Academy of the West, and Zermatt Festival Academy.

Where were you born?
I was born in Kyoto, Japan, where I lived until I was 7 years old. After that we moved to Massachusetts, where my parents still live.

How were you introduced to music and the bassoon?
My mom had me start piano lessons when I was three years old and, apparently, I fell asleep at my first lesson. The bassoon was something I became interested in after I joined the middle school band on the flute. We were working on a piece that had several measures of silence where a bassoon solo was supposed to be but we had no bassoonist at the time, so I volunteered to play it!

What do you look forward to most about living and working in Charlotte?
I got a pandemic puppy last year, so I'm excited to explore parks and walking trails around Charlotte with him! Coming from Boston, I'm also looking forward to warmer weather, especially during the winter.

What would like the audience to know about you?
That I'm so grateful for their passion and interest in music! As much time as we spend practicing by ourselves, what really gives our work meaning is the fact that we have people in the audience who are receptive to it, and who hopefully each take away something personal from the collective experience.