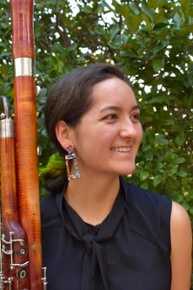 Maggie O’Leary leads a varied performing career, and loves introducing new audiences to the bassoon. A native of Southern California, Maggie began playing the bassoon at age 12 under the tutelage of Carolyn Beck. She received her Bachelor of Music degree from the Curtis Institute of Music and her Master of Music degree from Rice University’s Shepherd School of Music, where she studied with Daniel Matsukawa and Benjamin Kamins, respectively.

As an orchestral musician, she has previously held the position of contrabassoonist with the Symphony in C, and has appeared in concert with the Saint Paul Chamber Orchestra, Delaware Symphony, and New World Symphony. Maggie has participated in the Verbier Festival Orchestra, Tanglewood Music Center, New York String Orchestra Seminar, Sarasota Music Festival, Music from Angel Fire, and Aspen Music Festival and School, where she was the recipient of the Nancy Goeres Bassoon Fellowship. She was a finalist in the Philadelphia Orchestra’s 2018 Albert M. Greenfield Concerto Competition, and received Third Prize at the 2019 Meg Quigley Vivaldi Competition. Maggie’s performances have been featured on NPR’s From the Top, Southern California’s KUSC Radio, and Philadelphia’s WHYY.

Maggie is passionate about sharing her love of music with children and young adults. While attending Curtis Maggie frequently performed recitals for children at the Philadelphia Ethical Society, and as a member of Music from Angel Fire, she gave masterclasses, lessons, and informative programs for young musicians at schools all over New Mexico. When not playing bassoon or working on reeds, Maggie enjoys reading, trying new recipes, and thrift shopping.

How were you introduced to music and the bassoon?
When I was in fourth grade I started guitar lessons because I wanted to be in a rock band. However, practicing took way more discipline than I expected and after a year or so I gave up. In middle school I decided to give playing music another try and joined the school band program on the clarinet. A few months later I went to a Boston Pops concert, which was my first time ever seeing or hearing a bassoon. I was intrigued by how many keys it had, and liked the way it sounded. I doubled on clarinet and bassoon for about a year before deciding I wanted to focus on bassoon.

What do you look forward to most about living and working in Charlotte?
I'm looking forward to trying new restaurants and visiting Charlotte's museums, but I am most excited just to be playing in an orchestra again. Like most musicians, I haven't had many chances to play with other people over the past year and a half, so I really can't wait to perform more regularly. I feel lucky to be a part of this community; everyone in the orchestra has been very warm and welcoming, and I can't wait to make music with everybody!

What do you do for fun when you're not performing/practicing?
I really like to read, and I'm lucky to live just a short walk away from a branch of the Charlotte Public Library. One new hobby I have picked up recently is playing chess. I'm slowly studying up on strategies, but I also enjoy just playing for fun and seeing what happens.