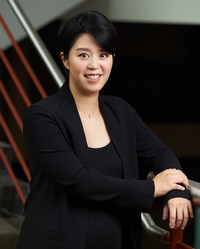 Born and raised in Seoul, Korea, Ms. Oh began studying bassoon in 2000 with Mr. Sangwon Yun, former principal bassoonist of the KBS Symphony Orchestra. She is the first Korean bassoonist who has B.M. and M.M. degrees at The Juilliard School, where she was a student of Kim Laskowski of the New York Philharmonic. As a highlight of her student years in school she was awarded second prize at The Juilliard School Mozart Bassoon Concerto Competition as a freshman. Her passion for the orchestra moved her to play as a principal bassoonist at the Juilliard School under conductors, Alan Gilberts, Michael Tilson Thomas, Yannick Nezet-Seguin, Leonard Slatkin, Matthias Pintscher, Semyon Bychkov.

As a reflection of her love for music, Ms. Oh has taught bassoon for over 10 years with her students being accepted to prestigious programs such as the Juilliard Pre-college and the Juilliard School. Olivia Oh resides in Charlotte with her husband and daughter Ruth, who was born in 2017. She is expecting another child in December 2018.

Hometown: Seoul, Korea
First season with the Charlotte Symphony: 2018-19
Why did you select your instrument?
I grew up in a musical family and started playing the piano at age 5. During elementary school, I picked up the violin but my both pinkies were too short to play the violin (They actually stopped growing since I was 7 years old). And I decided to play the oboe, but the fingering was still uncomfortable. So my oboe teacher recommended bassoon because I could adjust/lengthen the keys to my fingers.
Does your instrument have a special story?
My bassoon was made by Heckel in 1938. It is a "Mucetti Model" that key system of the left hand keys used to be the French system. Also, although every bassoon is one of a kind but mine is extra unique because the keys are adjusted to my fingers.
What would most surprise people about you?
People seem to be surprised to hear that I am a mother of the two under two. My first child is turning one in August 2018, and I am expecting another one in December 2018.
If you could meet one composer, who would it be and what would you ask him/her?
I want to meet Ravel and ask, "Could you make more solo pieces for bassoon?"
What’s your funniest/most compelling on-stage moment?
During the Summer festival in Aspen, I played the principal bassoon for the Beethoven's 5th symphony. At the beginning of the piece, the clarinetist next to me misunderstood the conductor's cue that the conductor's motion for the first note was a sign for us to stand up. Everyone started playing the piece while the clarinetist stood up and sat down immediately. I almost stood up too and had to try my best not to laugh on the stage and I almost missed the first few notes.
Any pre-performance rituals?
I always eat red meat in the morning. Right before the concert, I pray to God and see the photos of my family.
Other than your instrument, what would we find in your instrument case?
A huge water bottle.
What do you love most about being a professional musician?
Nothing can unite people at the same time for the same purpose; to make great music.
BLOG eCLUB SIGNUP