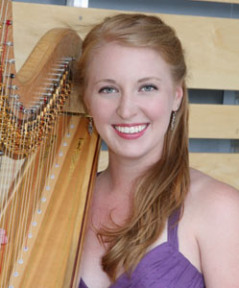 When did your musical experience begin? From birth!  My mother was pregnant with me while recording the 1987 Metropolitan Opera Wagner's Ring Cycle.  I started playing violin at age 3, piano at age 5, and harp at age 11.

What brought you to the CSO family? I saw a posting for a Principal Harp opening (a rarity overall) and decided to take the audition.  I had heard wonderful things about the city of Charlotte and the CSO and was thrilled when I won the audition!

What are your artistic dreams and aspirations?  I am so lucky to already have, what I consider, my dream job!  I have always wanted to be principal harp of a professional orchestra and am so honored to work with the CSO for my career.  I also love playing chamber music and teaching.  Hopefully in the future I will also teach at a college or university.

Name a performer you respect; why?  The first people that pop into my mind are my mother (a violinist) and father (a violist).  I was fortunate to grow up in a house where the first thing I remembering hearing was a full and beautiful string sound.  I try to emulate that same sound in my harp playing.  Along those same lines, I don't know what I would do without the recordings of Jacqueline du Pré.  Her recording of the Elgar Cello Concerto never fails to give me chills.

What's your vision for the future of the arts in Charlotte?  As the city of Charlotte grows, I would love to see the CSO and other arts organizations too grow and change with the diverse culture and people that call Charlotte home.  The arts are an integral part of every city and we are fortunate enough to have world-class musicians and artists that reside in Charlotte.
Read more

A Cellist’s Life, by Dorothy Cole

I didn't want to wear a tutu or a tiara.  As a five-year-old my dream was to play the cello.  This cello enchantment all started the first time I saw a cello in the home of my silver-haired Seattle neighbor, a retired Seattle Symphony cellist and the first woman member of that orchestra.  I was at once smitten by the cello's dark graceful shape and its warm voice.  A few years later we started instrumental music at my school and were given the opportunity to pick any instrument which we would like to play.   No question: cello for me!  I came home one day and discovered my wish granted; there was a cello waiting for me.
Later as a teenager I joined the Seattle Youth Symphony, and my inspiration exploded.   The more I studied and played, the more I wanted to study and play.   My next big step was to go on to the Eastman School of Music in Rochester, New York. Soon I was performing with the Hudson Valley Philharmonic and later the Greensboro Symphony, playing chamber music, and teaching lessons.

In 1977 I won an audition with the Charlotte Symphony, and since then this symphony has been my career, and Charlotte has become my home. If I had to name one high point in all of my Charlotte years, it would be the performance in the spring of 1986 when I was principal cello and the concerts featured Alicia de Larrocha in Brahms's Second Piano Concerto, which is largely a duet for piano and solo cello.   I was honored and thrilled. There have been so many wonderful concerts throughout my years with the Symphony but I think this season, my 34th, is best of all. I am enjoying every concert with our new conductor, Christopher Warren-Green.

I will always be a cellist, and the Charlotte Symphony will forever feel like my orchestra, my musical family. Now I am silver-haired and proudly ready to retire. What next?   Retirement will give me more time to spend with my grown son and daughter and my two grandsons. It will also give me time for making pottery.  If you happen to be going to the airport, you can see some of my work in the pottery exhibit on Concourse A.

CSO Cellist Dorothy Cole will retire at the end of the 2010-2011 season.
Read more