Happy New Year, CSO fans! This weekend ushers in the first Charlotte Symphony concert of 2012, with "Disney In Concert: Magical Music from the Movies." This show will feature famous Disney songs from The Little Mermaid, Beauty and the Beast, and The Lion King, among others. Four talented vocalists will perform with the CSO, backed by original storyboard artwork and Disney-produced visuals. 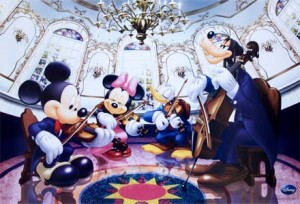 We sat down with the dynamic singers Andrew Johnson and Candice Nichole to get the inside scoop on Disney princesses, how they made it to the top, and wha treally goes on backstage. 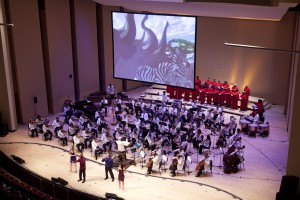 How long have you been singing and performing?
Candice Nichole.: My parents always exposed me to music and theatre when I was a little girl, but it wasn't until I was about 7 or 8 years old when I really began singing and got involved in community theatre.  From there, I began training vocally at the age of 9 and started working professionally for Disney at the age of 11.  At 13, I was invited by Maestro Barry Jekowsky to be the guest artist with the California Symphony and from that moment on, I knew for sure that this was my path and what I wanted to do with my life.

Tell us about your role within the production.
C.N.: As the soprano of the two female singers in "Disney in Concert" I really love the material I get to sing in this show.  I have always loved the music from The Little Mermaid and Beauty and the Beast  As a child I used to wrap a towel around my legs and sing "Part of Your World" pretending that I was Ariel, so it's really fun to get to sing these classic Disney songs in such a fabulous show as an adult now.
What do you love most about the show?
Andrew Johnson.: I love being on stage with my fellow cast members all at the same time. We have such a blast!
C.N.: What I love most about this show is the reactions we get from the audiences we perform for.  There is such a love for these Disney classics not only from young children, but all ages.  For those of us who grew up watching these Disney movies or whose children or grandchildren did, it's very nostalgic and a real walk down memory lane for them as they watch the show.  For the children of this generation who are still watching these Disney movies because they are so timeless, it's magical for them.  It's also such a fabulous way to introduce young children to Symphony music because it's music they can relate to.  I think it's so wonderful that the show appeals to all ages. Ted Ricketts and his wife Sherilyn Draper (Show Director) did such a fantastic job of weaving all these classic songs together in such a beautiful way.

We all have our favorite Disney characters and princesses- who's yours?
A.J. My favorite character is Ursula, because she's the most unique! Who ever thought of a evil octopus witch?!?
C.N.: I have to say, Ariel and Belle are my absolute favorites!  I've loved them ever since I was a little girl, and I'm not just saying that because I get to sing their songs in this show!  I have always identified with their passion and strong-willed determination.
Give us the real deal: what really goes on backstage? Got any fun stories?
A.J.: Backstage is a lot of prep for the show with lots of laughter. We don't see each other everyday so we catch up a lot. Sometimes it involves jokes and YouTube videos! Of course, there are lots of vocal warm ups too.
C.N.: Well....that would spoil all the magic, wouldn't it?
What one piece of advice would you give to young singers who want to make it?
A.J.: Always continue molding your craft. There's always room to be better and for the best foundation of singing and performing, study performers from previous generations...you will find all the skills needed for a successful and long career!
C.N.: I would say to any young aspiring singer/performer to train hard at your craft and keep on training even after you're busy performing.  It's important to constantly be working on your instrument and craft and always working at being the best you can be.  Also, perseverance is key.  If you really want to make it in this business, you have to be willing to never give up.
The Disney In Concert performances are this Saturday, January 7 at 2:30 and 8 p.m. Hear more from these amazing talents and experience the magic of Disney that can infuse kids of all ages.