In January's performance of Don Quixote, Principal Violist Ben Geller will bow alongside guest cellist Julian Schwarz, representing his loyal, bumbling sidekick in the Strauss work. Here, Geller, who joined the Charlotte Symphony in January 2014, shares stories (along with a sense of humor) about studying Suzuki as a child, his custom-made viola, and love of naps ... and chicken. 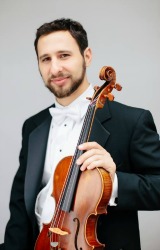 Are there any other musicians in your family?
I come from a very musical family. Everyone played something at some point, however my cousin Noah Geller (Concertmaster of the Kansas City Symphony) and I are the only professional orchestral musicians.

What is your earliest musical memory?
Suzuki class sometime in the late 80s. I had a cardboard pizza circle that I was supposed to stand on properly in designated foot outlines that was much more fun to throw like a Frisbee.

quite useful for me. It took me to the exact blog which I was looking for. Thanks